To Anyone Who Ever Asks: The Life, Music, and Mystery of Connie Converse (Hardcover) 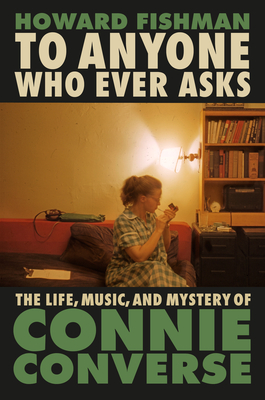 This is the mesmerizing story of an enigmatic life. When musician and New Yorker contributor Howard Fishman first heard Connie Converse’s voice on a recording, he was convinced she could not be real. Her recordings were too good not to know, and too out of place for the 1950s to make sense—a singer who seemed to bridge the gap between traditional Americana (country, blues, folk, jazz, and gospel), the Great American Songbook, and the singer-songwriter movement that exploded a decade later with Bob Dylan and Joni Mitchell.

And then there was the bizarre legend about Connie Converse that had become the prevailing narrative of her life: that in 1974, at the age of fifty, she simply drove off one day and was never heard from again. Could this have been true? Who was Connie Converse, really?

Supported by a dozen years of research, travel to everywhere she lived, and hundreds of extensive interviews, Fishman approaches Converse’s story as both a fan and a journalist, and expertly weaves a narrative of her life and music, and of how it has come to speak to him as both an artist and a person. Ultimately, he places her in the canon as a significant outsider artist, a missing link between a now old-fashioned kind of American music and the reflective, complex, arresting music that transformed the 1960s and music forever.

But this is also a story of deeply secretive New England traditions, of a woman who fiercely strove for independence and success when the odds were against her; a story that includes suicide, mental illness, statistics, siblings, oil paintings, acoustic guitars, cross-country road trips, 1950s Greenwich Village, an America marching into the Cold War, questions about sexuality, and visionary, forward thinking about race, class, and conflict. It’s a story and subject that is by turn hopeful, inspiring, melancholy, and chilling.

Howard Fishman is a frequent contributor to The New Yorker, where he has published essays on music, film, theater, literature, and culture. His essays have also appeared in Vanity Fair, The Washington Post Magazine, Artforum, San Francisco Chronicle, Mojo, The Village Voice, Jazziz, and Salmagundi. Fishman’s writing was awarded first prize for Arts & Entertainment Portfolio from the Society for Features Journalism, and he’s been an invited guest speaker on BBC Radio and on various NPR affiliates. His play, A Star Has Burnt My Eye, was a New York Times Critic's Pick. As a performing songwriter and bandleader, Fishman has toured internationally as a headlining artist for more than two decades. He has released eleven albums to date. He is based in Brooklyn, New York.