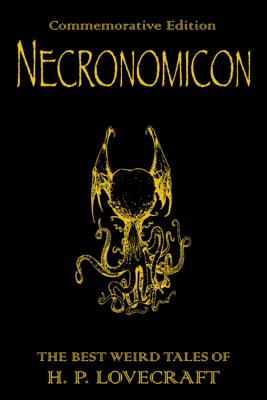 WIKIPEDIA says: 'H.P. Lovecraft's reputation has grown tremendously over the decades, and he is now commonly regarded as one of the most important horror writers of the 20th century, exerting an influence that is widespread, though often indirect.'

H.P. Lovecraft's tales of the tentacled Elder God Cthulhu and his pantheon of alien deities were initially written for the pulp magazines of the 1920s and '30s. These astonishing tales blend elements of horror, science fiction and cosmic terror that are as powerful today as they were when they were first published.

This handsome leatherbound tome collects together the very best of Lovecraft's tales of terror, including the complete Cthulhu Mythos cycle, just the way they were originally published. It will introduce a whole new generation of readers to Lovecraft's fiction, as well as being a must-buy for those fans who want all his work in a single, definitive, highly attractive volume.

Howard Phillips Lovecraft (1890-1937) is probably the most important and influential author of supernatural fiction of the 20th century. A life-long resident of Providence, R.I., many of his tales are set in the fear-haunted towns of an imaginary area of Massachusetts, or in the cosmic vistas that exist beyond space and time. Since his untimely death, he has become acknowledged as a master of fantasy fiction, and a mainstream American writer second only to Edgar Allan Poe, while his relatively small body of work has influenced countless imitators and formed the basis of a world-wide industry of books, games and movies based on his concepts. Stephen Jones has 100 books to his name as writer or editor, and dozens of awards in the horror and dark fantasy fields. He is is one of Britain's most acclaimed authorities on horror fiction and film.

Lovecraft opened the way for me, as he had done for others before me—STEPHEN KING

Preposterous, overblown, absurd in every way - yet with an originality that looks more powerful and convincing each time I dip into it.—PHILIP PULLMAN