Bridge to the Sun: The Secret Role of the Japanese Americans Who Fought in the Pacific in World War II (Hardcover) 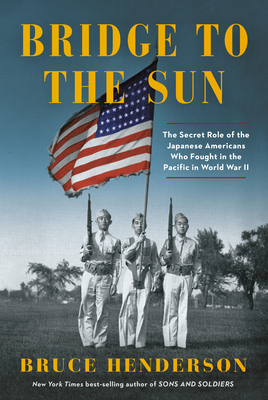 One of the last, great untold stories of World War II—kept hidden for decades—even after most of the World War II records were declassified in 1972, many of the files remained untouched in various archives—a gripping true tale of courage and adventure from Bruce Henderson, master storyteller, historian, and New York Times best-selling author of Sons and Soldiers—the saga of the Japanese American U.S. Army soldiers who fought in the Pacific theater, in Burma, Iwo Jima, Okinawa, with their families back home in America, under U.S. Executive Order 9066, held behind barbed wire in government internment camps.

After Japan's surprise attack on Pearl Harbor, the U.S. military was desperate to find Americans who spoke Japanese to serve in the Pacific war. They soon turned to the Nisei—first-generation U.S. citizens whose parents were immigrants from Japan. Eager to prove their loyalty to America, several thousand Nisei—many of them volunteering from the internment camps where they were being held behind barbed wire—were selected by the Army for top-secret training, then were rushed to the Pacific theater. Highly valued as expert translators and interrogators, these Japanese American soldiers operated in elite intelligence teams alongside Army infantrymen and Marines on the front lines of the Pacific war, from Iwo Jima to Burma, from the Solomons to Okinawa.

Henderson reveals, in riveting detail, the harrowing untold story of the Nisei and their major contributions in the war of the Pacific, through six Japanese American soldiers. After the war, these soldiers became translators and interrogators for war crime trials, and later helped to rebuild Japan as a modern democracy and a pivotal U.S. ally.

BRUCE HENDERSON is the author of more than twenty nonfiction books, including Sons and Soldiers: The Untold Story of the Jews Who Escaped the Nazi and Returned with the U.S. Army to Fight Hitler, and True North: Peary, Cook and the Race to the Pole. He is the co-author of the #1 New York Times bestseller And the Sea Will Tell (with Vincent Bugliosi). An award-winning journalist who has taught reporting and writing at USC School of Journalism and Stanford University, Henderson lives in northern California.

A New Yorker Best Book of the Year

“Bridge to the Sun is a masterpiece and a sacred effort. This is a work for the ages.” —Eric Saul, military historian, co-founder National Japanese American Historical Society

“Bridge to the Sun tells the unforgettable true story of Japanese American troops who defended our nation while serving in the U.S. Army during World War II—even as their families were being imprisoned in American internment camps back home. This book honors their courage and sacrifices, and it highlights the lesser-known service of the Japanese Americans who helped save countless American lives as part of the Army’s Military Intelligence Service while fighting on two fronts: against the Japanese overseas and against racial prejudice here at home.” —Senator Tammy Duckworth

“Exceptional . . . Henderson enriches his sweeping overview of the Pacific campaign with intimate profiles . . . A stirring tribute to the courage and sacrifice of young men who exemplified ‘the true definition of patriotism.’” —Publishers Weekly (starred review)

“[A] clearly written tale of patriotism and resilience . . . Henderson sketches the life stories of Japanese Americans who waged a war against racial prejudice at home and fascism abroad by serving as interpreters, translators, and soldiers . . . Readers will appreciate the vignettes on courage, culture, and the intricacies of the Japanese language.” —Library Journal

“Henderson, a journalist who has written more than 20 books, many of them dealing with World War II, brings a great deal of investigative acumen to his latest. He follows the stories of several ‘nisei—first-generation American citizens born in the United States whose parents were immigrants from Japan’—to give personal depth to the bigger picture . . . This book is an important step in providing much-needed recognition for these brave Americans. A fascinating piece of history with threads of courage and poignancy, brought to life by an accomplished storyteller.” —Kirkus

“Bridge to the Sun tells a revelatory American story about the Japanese American soldiers who served in the Military Intelligence Service in the Pacific during World War II. Their very cultural background which made so many Americans suspicious and led to the incarceration of 110,000 ethnic Japanese—most of them U.S. citizens—became an invaluable American military asset. Henderson’s focus on six MIS Nisei allows him to tell their narratives in vivid, well-researched detail and his skills as a narrator make this book both engaging and informative. Amid our present anti-immigrant xenophobia, this book provides a necessary lesson: Immigrants and diversity are our strength and are central to our history.” —David Mura, author of Turning Japanese: Memoirs of a Sansei, and co-producer/writer of the PBS documentary, Armed With Language

"Bruce Henderson, brilliant at unearthing little-known, yet important, stories, does it again with Bridge to the Sun, this time shining a light on Japanese Americans who nobly served their nation in a war with their ancestral homeland, Japan. In focusing on a handful of Nisei soldiers, Henderson personalizes the war and triumphs in making their struggles more evident. Readers will be moved by the courageous tales of these individuals who fought with such skill for the land of their birth, America." —John Wukovits, author of Tin Can Titans

“Riveting! Bruce Henderson is a gifted storyteller. In Bridge to the Sun, he juxtaposes ethnic ancestry with patriotic loyalties to show how Japanese American soldiers fought discrimination and prejudice to help win World War II in the Pacific. Having made a PBS documentary about the Military Intelligence Service, I appreciate how meticulously Henderson researched this complicated and intricate story, skillfully weaving together the battles these young men fought on and off the field, and ultimately triumphing despite the poignant, human cost of war. A dramatic saga not to be missed for the parallels it draws today.” —Gayle K. Yamada, director/writer, Uncommon Courage: Patriotism and Civil Liberties

“Bridge to the Sun tells a big story through six men who brought the skills of military intelligence learned at Camp Savage and Fort Snelling to the Pacific theater -- including that of Grant Hirabayashi, who fought with Merrill's Marauders in Burma, while at home his cousin Gordon fought the race-based curfew and mass removal all the way to the Supreme Court. Meticulously researched and expertly told, Bridge to the Sun is a significant addition to the epic narrative of Japanese American history.” —Frank Abe, co-author of We Hereby Refuse: Japanese American Resistance to Wartime Incarceration

“Bruce Henderson has given us another vivid and deeply researched story, this time about courageous Japanese American soldiers who used their linguistic skills to help defeat Imperial Japan in WWII, and build a better world. With Japanese faces but American hearts, the Nisei proved their loyalty again and again on distant battlefields. All Americans owe them a great debt.” —James C. McNaughton, author of Nisei Linguists

“Bruce Henderson’s Bridge to the Sun poignantly reveals the powerful stories of Japanese American soldiers who volunteered to serve with the U.S. Military Intelligence Service in the Pacific Theater during WWII while many of their families were incarcerated in America’s concentration camps.  A must read for anyone wanting to understand the depth and sacrifices these soldiers made to prove their loyalty to the United States.” —Lucy Ostrander, coproducer, Proof of Loyalty and Honor & Sacrifice

“The Japanese American story, as was written in the 1988 federal law HR 442, declares we were and are loyal citizens of this country, deserving of an apology and redress for the unjust actions of our government during WW II.  Yet what Bruce Henderson reveals in Bridge to the Sun is the story of those who were loyal to our common humanity—that of Nisei soldiers recruited into the secret Military Intelligence Service to serve America in the Pacific theater.  Famed for crucial assistance through tough campaigns in Burma, the South Pacific, and Okinawa, these men demonstrated skills not only as interpreters and interrogators, but as compassionate bridges between the American and Japanese societies that raised them, instrumental in saving both American and Japanese lives.  This remarkable work chronicles a history that has long been classified and unknown—not even to the descendants of these exceptional men.  I wept to read it, each word a monument to unageing heroism, each sentence a hymn to an everlasting dignity that, even in a time of war, countered racial hate with human sympathy.  Me ke aloha…” —Garrett Hongo, author of The Perfect Sound