We That Are Young: A novel (Paperback) 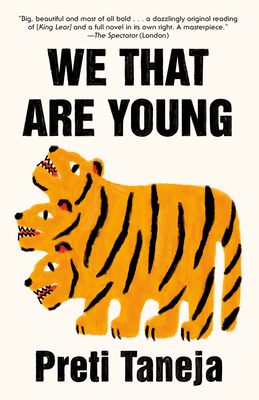 When a billionaire hotelier and political operator attempts to pit his three daughters against one another, a brutal struggle for primacy begins in this modern-day take on Shakespeare’s King Lear. Set in contemporary India, where rich men are gods while farmers starve and water is fast running out, We That Are Young is a story about power, status, and the love of a megalomaniac father. A searing exploration of human fallibility, Preti Taneja’s remarkable novel reveals the fragility of the human heart—and its inevitable breaking point.

Preti Taneja was born in England to Indian parents. She has worked with youth charities, with refugees, and in conflict and post-conflict zones on minority and cultural rights, and teaches writing in prisons and universities. She is the co-founder of the advocacy collective ERA Films and of Visual Verse, an online anthology of art and words. We That Are Young won the 2018 Desmond Elliot Prize for the UK’s best debut novel and was nominated for numerous international awards, including the Folio Prize, India’s Shakti Bhatt First Novel Prize, and Europe’s most prestigious award for a work of world literature, the Prix Jan Michalski.

“Big, beautiful and most of all bold. . . . A dazzlingly original reading of [King Lear] and a full novel in its own right. A masterpiece.” —The Spectator

“[Taneja’s] landscape bristles with ghosts, Shakespeare flickering in an eerie déjà vu. The bones show through, and the book is all the fiercer for it.” —T Magazine

“The absolute mastery of Taneja's narrative style and the precision of her language is unforgettable.” —Los Angeles Review of Books

“Extraordinary. That rare thing—a genuinely new voice. Spellbinding. It does what all the best novels do. It expands the possibilities of the form.” —Mark Haddon, author of The Curious Incident of the Dog in the Night-Time

“Dizzying, dazzling. . . . Taneja has packed her debut novel with so much insight and feeling for contemporary India.” —The Boston Globe

“Original and exquisite. . . This is a new voice, vivid, full of imagery and pace, and with a richness to match the vibrancy of its world.” —Alexander Nurnberg, The Sunday Times (London)

“Impressive . . . [We That Are Young] uses King Lear as a template but fearlessly carves a territory of its own. . . . [Taneja] offers a portrait of modern India both panoramic and complex. . . . A work of epic scope and depth that’s bracingly of the current moment.” —Publishers Weekly (starred review)

“A brilliant first novel. . . . A must-read.” —The Washington Times

“We That Are Young is a powerful, engrossing chronicle of family and politics in contemporary India, perfectly constructed, magnificently written.” —Jim Crace, author of Harvest

“[Taneja] paints a remarkable picture of contemporary India through the voices of her characters.” —The Irish Times

“Every now and then, a writer grabs you in the first paragraph and doesn’t let go. Such is the case with Taneja, whose stunning debut brims with familial jealousy, sexual tension, political turmoil, and shocking violence.” —Library Journal (starred review)

“We That Are Young is a masterpiece. I can’t remember when I last read a book so uncompromising, fierce and emotionally vast.” —Omar El Akkad, author of American War

“Multilayered and densely structured, We That Are Young offers a fresh take on a timeless tale. . . . Taneja deftly exposes the stark contrast between the Twitter-saturated media narrative surrounding the rich and powerful, and the reality of their actions.” —Booklist

“An extraordinary reimagining of King Lear in a culture and a cultural moment that resonates so powerfully it is as exciting for me as coming upon Lear for the first time.” —James Shapiro, author of The Year of Lear