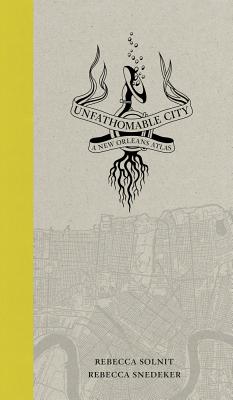 Like the bestselling Infinite City: A San Francisco Atlas, this book is a brilliant reinvention of the traditional atlas, one that provides a vivid, complex look at the multi-faceted nature of New Orleans, a city replete with contradictions. More than twenty essays assemble a chorus of vibrant voices, including geographers, scholars of sugar and bananas, the city's remarkable musicians, prison activists, environmentalists, Arab and Native voices, and local experts, as well as the coauthors’ compelling contributions. Featuring 22 full-color two-page-spread maps, Unfathomable City plumbs the depths of this major tourist destination, pivotal scene of American history and culture and, most recently, site of monumental disasters such as Hurricane Katrina and the BP oil spill.

The innovative maps’ precision and specificity shift our notions of the Mississippi, the Caribbean, Mardi Gras, jazz, soils and trees, generational roots, and many other subjects, and expand our ideas of how any city is imagined and experienced. Together with the inspired texts, they show New Orleans as both an imperiled city—by erosion, crime, corruption, and sea level rise—and an ageless city that lives in music as a form of cultural resistance. Compact, lively, and completely original, Unfathomable City takes readers on a tour that will forever change the way they think about place.

Rebecca Solnit is the author of many books, including Savage Dreams, Storming the Gates of Paradise, and Infinite City: A San Francisco Atlas, all from UC Press. Rebecca Snedeker is an Emmy Award–winning independent filmmaker and native New Orleanian.

"New Orleans natives tell the same story in boardrooms and bus stops: Their city is a puzzle wrapped in a tease, a mystery scented by sweet olive and garbage, veiled by humidity, echoing with brass bands and the occasional gunshot. That’s the mystery probed on each page of Unfathomable City: A New Orleans Atlas, the grand, map-laden anthology assembled by local filmmaker Rebecca Snedeker and the celebrated essayist and thinker Rebecca Solnit. . . . Packed with colorful maps and essays by star writers, this atlas-with-attitude encompasses second-line parades, the banana trade, bounce music, the revival along the St. Claude Avenue corridor, and conversations with such iconic musicians as George Porter Jr. and Donald Harrison Jr."—Top 10 Books of 2013 for New Orleans Readers
— Times-Picayune

"Unfathomable City: A New Orleans Atlas is a book about New Orleans, but it's also a book about the kind of shared experiences and tensions that could exist in almost any city. Twenty-two maps illustrate ancient and recent histories of the Crescent City, with local tabs that inspire hums of pride. . . . Though many of those labels are specific to New Orleans, the themes they highlight exist other places, making the book not only a local's guide to the city, but also an anthropologist's guide to the idea of metropolis."
— Gambit

"With Unfathomable City, Solnit and Snedeker have produced an idiosyncratic, luminous tribute to the greatest human creation defined by its audience participants: the city itself."
— New York Times

"This book is part visionary road map, part post-­traumatic Katrina therapy and part poetic love ode/lament to our city. . . . After reading this book you’ll want to go out and map things that are important or quirky to you."
— New Orleans Tribune

"'Unfathomable City's' secret weapon is its imaginative cartography. . . . Each chart, like a plate in a restaurant, has ingredients and flavors that take the reader deep into the city's history. If you think you know these streets, this atlas will make you want to walk them again."
— San Francisco Chronicle

"A deeply illuminating assemblage of maps and essays."
— Chicago Tribune


"A vivid portrait of one of America's most culturally rich cities. More than an atlas or a travel guide, the book provides a compendium of perspectives and histories, comprised of 22 short essays and numerous colorful and beautifully illustrated companion maps. . . . A captivating read for tourists, Louisiana residents, and just about anyone looking to gain familiarity with United States history, folklore, and myth-culture."  STARRED REVIEW
— Publishers Weekly

"By addressing both the vibrant culture of public celebration (the second lines and the krewe parades and the near-constant festivals) and New Orleans’s bleaker side (environmental exploitation, the opportunism of the banana industry, the failures of post-Katrina authority), Solnit and Snedeker present an honest portrait. They delve deep into the city’s history, as far back as pre-European colonization, and resurface in the present, with bounce music and housing projects. Moreover, unlike many recent New Orleans books, they don’t overly dwell on Katrina to milk sympathy or a morbid interest from their readers. In short, Unfathomable City is beautifully balanced."
— Oxford American

"The maps are playful, colorful and alive—in contrast to the utility we're used to with online mapping sites and apps. They're a joy to study; New Orleanians will no doubt pore over the map depicting the ongoing revival of once moribund St. Claude Avenue and the parade routes of the city's archaic but surviving social-aid and pleasure clubs. Tourists familiarizing themselves with the city may spend more time on the "Repercussions" map, tracing jazz history and club locations, or Billy Sothern's "sites of contemplation and delight," featuring sculpture gardens, synagogues and Meyer the Hatter. . . . Ms. Solnit and Ms. Snedeker prove that atlases can still fire the imagination and incite wonder."
— Wall Street Journal

"An essential introduction to NOLA."
— AFAR

"The effect of Unfathomable City and the series of which it is a part is that of a healthy and bracing critique—one that we urgently need in this time of ubiquitous geographic information. It is a critique we should hope will extend to other American places as this lovely series continues."
— Orion

"A fascinating look at New Orleans. Through 22 maps varying in their strange detail and beauty, each accompanied by an essay, Solnit and Snedeker put together a deep portrait of the city and so much of what makes it unique."
— Cleveland Plain Dealer

"A beautifully creative and colorful atlas of New Orleans . . . a rich visual and literary banquet, serving up a kaleidoscopic array of perspectives on the city's multifarious peoples and their struggles and victories."
— San Antonio Express-News

"With beautiful maps and challenging essays, Unfathomable City presents New Orleans as infinitely complex and ultimately unknowable. The result is not a comprehensive guide, but an invitation."  STARRED REVIEW
— Shelf Awareness

"A series of beautifully designed maps draw visual connections between the shifting landscape and points of human interest. Short and accessible essays discuss topics from reflective political commentary to whimsical points of intrigue . . . Distinctive, inviting, and will help draw you into this unique exploration of New Orleans.”
— Scout Magazine

"Unfathomable City is, like New Orleans herself, unique. Filled with twenty-two gorgeously illustrated and colored maps of the city, each spread across two pages, it’s an atlas that aims to both educate and challenge."
— Mississippi Business Journal