The Dragonfly Sea: A novel (Hardcover) 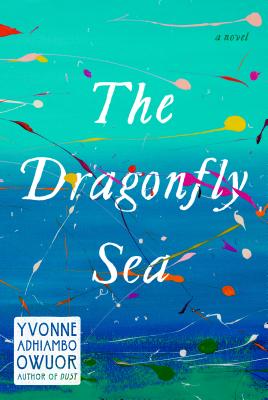 What to call this masterpiece; Epic-realism; epic-something-or-other, for it takes some Homer and much real history, like the famed Chinese admiral Zheng He and the contemporary artist Zao Wou-Ki, and crafts a tale with characters who begin life on Pate, a small island off Kenya. Mixing cultures, languages and tragedies this novel will bend you in every direction. Yvonne Adhiambo Owuor has written a novel which will inhabit you. — From Jeff's Picks

NAMED A REAL SIMPLE BOOK OF THE YEAR

From the award-winning author of Dust comes a vibrant, stunning coming-of-age novel about a young woman struggling to find her place in a vast world--a poignant exploration of fate, mortality, love, and loss.

On the island of Pate, off the coast of Kenya, lives solitary, stubborn Ayaana and her mother, Munira. When a sailor named Muhidin, also an outsider, enters their lives, Ayaana finds something she has never had before: a father. But as Ayaana grows into adulthood, forces of nature and history begin to reshape her life and the island itself--from a taciturn visitor with a murky past to a sanctuary-seeking religious extremist, from dragonflies to a tsunami, from black-clad kidnappers to cultural emissaries from China. Ayaana ends up embarking on a dramatic ship's journey to the Far East, where she will discover friends and enemies; be seduced by the charming but unreliable scion of a powerful Turkish business family; reclaim her devotion to the sea; and come to find her own tenuous place amid a landscape of beauty and violence and surprising joy. Told with a glorious lyricism and an unerring sense of compassion, The Dragonfly Sea is a transcendent story of adventure, fraught choices, and of the inexorable need for shelter in a dangerous world.

YVONNE ADHIAMBO OWUOR was born in Kenya. She is the author of the novel Dust, which was shortlisted for the Folio Prize. Winner of the Caine Prize for African Writing, she has also received an Iowa Writers' Fellowship. Her work has appeared in McSweeney's and other publications, and she has been a TEDx Nairobi speaker and a Lannan Foundation resident. She lives in Nairobi, Kenya.

“A dazzling coming-of-age tale . . . This lushly written epic of contemporary cultural clashes and world politics is as magically enveloping as a fairy tale.”—People

“Readers who gravitate toward glorious prose will find a feast in The Dragonfly Sea . . . Mesmerizing . . . The story is deftly interwoven with a sense of life’s fragility . . . The author brings the story full circle with passages that dazzle and enlighten.”—Barbara Clark, BookPage

“With a rich and enormous cast of global characters, Owuor depicts the cultural complexities of East Africa in a stirring story of loss and discovery.”—Barbara VanDenburgh, USA Today

“Owuor weaves elements of a haunting coming-of-age novel, a seductive romance, and a fascinating historical . . . Lyrical, luminous . . . The scent of rosewater wafts from each page . . . A stunning novel.”—Sally Bissell, Library Journal (starred)

“A stunning portrait of a young woman, setting off on a journey in which she encounters struggle, adventure, and great beauty.”—Southern Living

“Yvonne Adhiambo Owuor—to my mind, one of the most impressive and breathtaking authors to emerge from Africa in recent years . . . Owuor writes in heart-stopping bursts of imagery and retooled language, all the while unspooling a story that is never less than riveting. With her second novel, Owuor continues to carve out her own literary territory and hone a voice that is gloriously unique.”—Vanity Fair “The Best Books of 2019 So Far”

“The novel spans several lives, two continents, one body of water and at least six languages, but what holds it together is not a person, place or tongue. Rather it’s a certain oceanic feeling (to lift a line from Freud, who lifted it from Romain Rolland), a sensation of oneness with the universe . . . In its omnivorous interest in the world, The Dragonfly Sea is a paean to both cultural diffusion and difference . . . On the other hand, the novel insists with equal force that its cosmopolitanism is deeply compatible with cruelty . . . As much as The Dragonfly Sea traces the globe, it also depicts an internal pilgrimage, its heroine in rose attar a broken saint.”—Shaj Mathew, New York Times Book Review

“This sophomore novel from one of Africa’s most exciting voices in fiction delivers on expectations . . . The Dragonfly Sea is a continent-hopping novel of epic proportions.”—Elena Nicolaou, Refinery29

“A magisterial novel . . . Sweeping . . . Gorgeous . . . Heart-rendingly lyrical . . . Owuor has ultimately written a novel that is about everything the war on terror cannot register: the vastness, complexity, and richness of East Africa’s cultural world. She represents it as a stunning mélange of Islamic and African cultural traditions that are woven together via the motif of the sea . . . Owuor’s language is so lush, and her vision so vibrant, that [it] feels like sinking down into the intricacy of East Africa.”—Kirkus Reviews (starred)

“Still more brilliance from Africa . . . An exhilarating big novel, altogether so beautiful you often won’t know whether to laugh or cry . . . To read it is to be a kid again . . . Just a wonderfully good time.”—George Ernsberger, Shawangunk Journal

“Owuor brings to life a beautiful story of loss and compassion . . . Elucidating her characters’ emotions and struggles, Owuor takes readers to the core of each one and shows that even in the face of heartache and betrayal, there is always a path to redemption.”—Melissa Norstedt, Booklist

“Through deep, poetic prose, Owuor draws the reader into the sweeping currents of life at the turn of the 21st century in this non-Western world . . . Owour weaves all of these influences deftly into a stunningly rich story that taps the deepest questions of belonging and relationship.”—Aimee Appell, The Missourian

“In this sprawling, beautiful novel from Owuor, a real-life occurrence of a Kenyan woman traveling to China after learning of her Chinese heritage forms the backdrop for a moving story of loss and discovery . . . Brilliantly capturing Ayaana’s sense of loss of her home and her family, as well as her hope for the future, Owuor’s mesmerizing prose lays bare the swirling global currents that Ayaana is trapped within. With a rollicking narrative and exceptional writing, this epic establishes Owuor as a considerable talent.”—Publishers Weekly (starred)

“You will smell the sea, be swayed by its currents and feel the texture of the place with every flip of the page . . . It will transport you to other lands, and also break your heart. Thankfully, when the characters are reshaped by the waters and find themselves again, you will also patch yourself together . . . A mesmerizing rendering of a little talked about island and its people.”—The East African (Kenya)

“Unprecedented . . . The aptness of the descriptions, the exactness of geographies and the intricate histories of hurt tell of extensive research and very serious reading behind it . . . The Dragonfly Sea offers a new journey of liberation, discovery, reflection, interaction and even new imagination.”—The Daily Nation (Kenya)

“People, music, languages sail back and forth; The Dragonfly Sea colorfully dips in and out of several languages . . . [a] lyrical and contemplative book.”—Asian Review of Books