Enrique's Journey (The Young Adult Adaptation): The True Story of a Boy Determined to Reunite with His Mother (Hardcover) 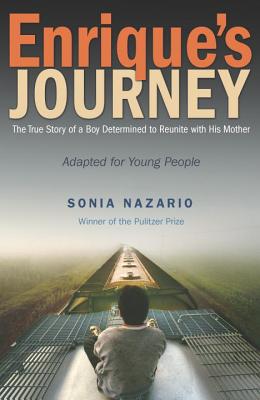 By Sonia Nazario
$19.99
This item is out of stock with our warehouse. Some recently published books may be in stock @ Room. Email to check.

In this bestselling true story, one Honduran boy goes in search of his mother, who left to find work in the United States ten years ago—when he was just seven years old.

This is the true and heartbreaking story of sixteen-year-old Enrique, who sets off on a journey alone to find his mother, who he has not seen for eleven years, not since she left her starving family and illegally entered the United States, hoping to make enough money to send home to Honduras.

With little more in his pocket than a slip of paper bearing his mother’s phone number, Enrique embarks on a treacherous odyssey, traveling by clinging to the sides and tops of freight trains. Even when confronted by bandits, thugs, and corrupt cops, he is determined to complete his journey, often buoyed by the kindness of strangers or simply by luck finding water or food. In the face of this hostile world, Enrique’s love for his mother and his desire to be reunited with her endure and triumph.

Enrique’s journey tells the larger story of undocumented Latin American migrants in the United States. His is an inspiring and timeless tale about the meaning of family and fortitude that brings to light the daily struggles of migrants, legal and otherwise, and the complicated choices they face. The issues seamlessly interwoven into this gripping nonfiction work for young people, based on the adult phenomenon Enrique's Journey: The Story of a Boy's Dangerous Odyssey to Reunite with His Mother and the Pulitzer Price-winning Los Angeles Times newspaper series that inspired it, are perfect for common core usage and for discussions of current events.

Includes an 8-page photo insert, as well as an epilogue that describes what has happened to Enrique and his family since the adult edition was published.

“A heartwrenching account. Provides a human face, both beautiful and scarred, for the undocumented. A must read." —Kirkus Reviews, Starred

"This powerfully written survival story personalizes the complicated, pervasive, and heart-wrenching debates about immigration and immigrants' rights and will certainly spark discussion in the classroom and at home."—Booklist

SONIA NAZARIO was a projects reporter for the Los Angeles Times. She has spent more than two decades reporting and writing about social issues. She won the Pulitzer Prize for her work on the Los Angeles Times series that served as the basis for the adult edition of Enrique's Journey. Sonia Nazario lives in Los Angeles with her husband.


From the Hardcover edition.

"A prodigious feat of reporting . . . vivid and detailed . . . [Nazario is] amazingly thorough and intrepid.”—Newsday

“An amazing tale . . . for some journalists, research means sitting at a computer and surfing Google . . . For Sonia Nazario . . . it means leaving home for months at a time to sit on top of a moving freight train running the length of Mexico, risking gangsters and bandits and the occasional tree branch that might knock her off and thrust her under the wheels. It means not eating, drinking water or going to the bathroom for 16-hour stretches-all in service to the story.”—San Francisco Chronicle

“[A] searing report from the immigration frontlines . . . as harrowing as it is heartbreaking. . . . [Nazario] is a fearless reporter who traveled hundreds of miles atop freight trains in order to palpably re-create the danger that faces young migrants as they flee north.”—People (four stars)

“Astounding . . . I am unaware of any journalist who has voluntarily placed herself in greater peril to nail down a story than did Nazario.”— Steve Weinberg, former Executive Director of Investigative Reporters and Editors, The Baltimore Sun

“A story of heartache, brutality, and love deferred that is near mythic in its power.”—Los Angeles Magazine

“Stunning . . . As an adventure narrative alone, Enrique’s Journey is a worthy read. . . . Nazario’s impressive piece of reporting . . . turn[s] the current immigration controversy from a political story into a personal one.”—Entertainment Weekly

“Gripping . . . astounding . . . viscerally conveys the experience of illegal immigration from Central America . . . [Nazario] has crafted her findings into a story that is at once moving and polemical.”—Publishers Weekly (starred review)

“A remarkable feat of immersion reporting . . . [Gives] the immigrant . . . flesh and bone, history and voice . . . The kind of story we have told ourselves throughout history, a story we still need to hear.”—Los Angeles Times Book Review

“This portrait of poverty and family ties has the potential to reshape American conversations about immigration.”—Kirkus Reviews (starred review)

“A meticulously documented account of an epic journey, one undertaken by thousands of children every year . . . [Nazario] covers both positive and negative effects of immigration, illuminating the problem’s complexity. . . . In telling Enrique’s story [she] bears witness for us all.”—San Francisco Chronicle

“Gripping and harrowing . . . a story begging to be told . . . readers fed up with the ongoing turf wars between fact and fiction, take note: Here is fantastic stunt reporting that places this sometimes hard-to-believe story squarely in the realm of nonfiction.”—The Christian Science Monitor

“[Enrique’s Journey] personifies one of the greatest migrations in history. . . . Much of the book is a thriller . . . a 12,000-mile journey worthy of an Indiana Jones movie.”—The Orange County Register

“Riveting . . . expert reporting . . . Nazario puts a human face upon a major issue. . . . The breadth and depth of [her] research is astounding.”—The Plain Dealer

“Insightful and beautifully written and sheds a great deal of light on the horrific journeys immigrants risk to find a better life. Highly recommended.”—Library Journal

“This is a harrowing odyssey that depicts one young man's attempts to reunite with his mother and the social and economic issues involved in illegal immigration.”—Booklist

“This is a twenty-first-century Odyssey. Nazario’s powerful writing illuminates one of the darkest stories in our country. This is outstanding journalism. If you are going to read only one non-fiction book this year, it has to be this one, because you know these young heroes. They live next door. . . .”—Isabel Allende

“Enrique’s Journey is an empathetic glimpse into the Faustian bargain made by immigrants who leave family behind for a bet on the rewards of life in the North. Sonia Nazario’s brave reporting focuses particularly on a consequence of one woman’s departure from Central America: the horrific gauntlet suffered by her son as he traverses Mexico, often in the company of similar children, all of them in search of their parents.”—Ted Conover

“Here is an account of a boy’s childhood and youth that becomes a powerfully instructive summons to us readers, who grow into Enrique’s grateful, spellbound students. His life, his vivid search, teach a haunting lesson of suffering that turns into a kind of redemption.”—Robert Coles

“Enrique's Journey is an important, compelling, harrowing tale, one which will long stay with you. We should all be grateful that Sonia Nazario went to such extraordinary lengths to bring us this story. This is reportage at its finest, both courageous and passionate.”—Alex Kotlowitz

“Enrique’s Journey is the odyssey of our time and place. The story of a boy’s brave and harrowing search for the mother who loved him but left is the most telling, moving, and unsparing account I have ever read about those who struggle and sacrifice to give their families better lives, and the loneliness and regret that no success can ever fully put to rest. It is a great American—I emphasize that—story, beautifully reported.”—Scott Simon

“Gripping, heroic and important, Enrique's Journey captures the heart. Most Americans or their forebears came to the United States from other countries. They experienced difficult journeys and wrenching family separations-all in the hope of finding a better life in this new land. Enrique's story is our story, beautifully told.”—Edward James Olmos