Walkable City: How Downtown Can Save America, One Step at a Time (Hardcover) 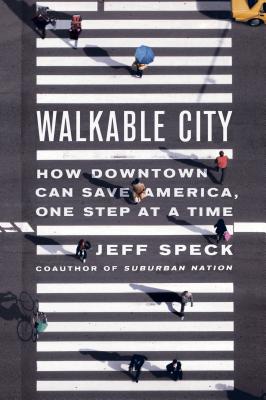 By Jeff Speck
Email or call for price
Special Order

Jeff Speck has dedicated his career to determining what makes cities thrive. And he has boiled it down to one key factor: walkability.
The very idea of a modern metropolis evokes visions of bustling sidewalks, vital mass transit, and a vibrant, pedestrian-friendly urban core. But in the typical American city, the car is still king, and downtown is a place that's easy to drive to but often not worth arriving at.
Making walkability happen is relatively easy and cheap; seeing exactly what needs to be done is the trick. In this essential new book, Speck reveals the invisible workings of the city, how simple decisions have cascading effects, and how we can all make the right choices for our communities.
Bursting with sharp observations and real-world examples, giving key insight into what urban planners actually do and how places can and do change, Walkable City lays out a practical, necessary, and eminently achievable vision of how to make our normal American cities great again.

Jeff Speck, coauthor of the landmark bestseller Suburban Nation, is a city planner who advocates for smart growth and sustainable design. As the former director of design at the National Endowment for the Arts, he oversaw the Mayors’ Institute on City Design, where he worked with dozens of American mayors on their most pressing city planning challenges. He leads a design practice based in Washington, D.C.

“Jeff Speck, AICP, is one of the few practitioners and writers in the field who can make a 312-page book on a basic planning concept seem too short . . . For getting planning ideas into the thinking and the daily life of U.S. cities, this is the book.” —Planning magazine

“Jeff Speck's brilliant and entertaining book reminds us that, in America, the exception could easily become the rule. Mayors, planners, and citizens need look no further for a powerful and achievable vision of how to make our ordinary cities great again.” —Joseph P. Riley, mayor of Charleston, S.C.

“City planning and urban development are phrases almost guaranteed to bore and confuse regular people. Which is weird, given that cities are the least boring places on earth. Fortunately, Jeff Speck is a deeply knowledgeable, charming, and jargon-free visionary, a profoundly pragmatic person brimming with common sense everybody can use to improve their own lives as well as their towns and cities. If Jane Jacobs invented a new urbanism, Walkable City is its perfect complement, a commonsense twenty-first-century user's manual.” —Kurt Andersen, host of Studio 360 and author of True Believers

“Cities are the future of the human race, and Jeff Speck knows how to make them work. In Walkable City, he persuasively explains how to create rational urban spaces and improve quality of life by containing the number one vector of global environmental catastrophe: the automobile.” —David Owen, staff writer at The New Yorker and author of Green Metropolis

“Companionable and disarmingly candid, Jeff Speck perches on your shoulder and gets you to see your community with fresh eyes. He gradually builds a compelling case for walkability as the essential distillation of a vast trove of knowledge about urbanism and placemaking. The case he makes has you both nodding at the intuitive and seemingly obvious wisdom presented, and shaking your head at why those basic principles of fixing our cities have eluded us for so long.” —Harriet Tregoning, founder of the National Smart Growth Network

“Jeff Speck understands a key fact about great cities, which is that their streets matter more than their buildings. And he understands a key fact about great streets, which is that the people who walk along them matter more than the cars that drive through them. Walkable City is an eloquent ode to the livable city and to the values behind it.” —Paul Goldberger, Pulitzer Prize–winning architecture critic and author of Why Architecture Matters

“With Walkable City, Jeff Speck demonstrates why he is among the most relevant and engaging writers on urban design today.” —Ron Bogle, president and CEO of the American Architectural Foundation

“When I speak around the country, people ask me what is the first thing they should do to start their community on the path of smart growth. I will now say: Read Jeff Speck's Walkable City.” —Parris Glendening, governor of Maryland (1995–2003) and president of Smart Growth America's Leadership Institute

“Truly a book that is so very needed, Walkable City moves theory into action. We now know we need to build walkable urban places for all sorts of economic, social, and environmental reasons. Jeff Speck shows how to do it in the same clear style we came to love in the classic Suburban Nation.” —Christopher B. Leinberger, visiting fellow at the Brookings Institution and author of The Option of Urbanism