An Amerikan Family: The Shakurs and the Nation They Created (Hardcover) 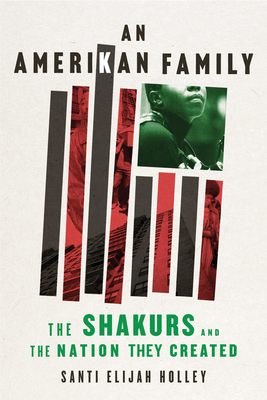 An enlightening history of the rise and lasting impact of Black liberation groups in America, as seen through the Shakurs, one of the movement’s most prominent and fiercely creative families, home to Tupac and Assata, and a powerful incubator for today’s activism, scholarship, and artistry.

They have been celebrated, glorified, and mythologized. They have been hailed as heroes, liberators, and freedom fighters. They have been condemned, pursued, imprisoned, exiled, and killed. But the true and complete story of the Shakur family—one of the most famous names in contemporary Black American history—has never been told.

For over fifty years, the Shakurs have inspired generations of activists, scholars, and music fans. Many people are only familiar with Assata Shakur, the popular author and thinker, living for three decades in Cuban exile; or the late rapper Tupac. But the branches of the Shakur family tree extend widely, and the roots reach into the most furtive and hidden depths of the underground.

“What COINTELPRO worked so hard at wiping out is forever chronicled in this lost chapter of Amerikan history. Funny how the history of one family can cover so much ground, unearth so many bodies, and reveal so many conspiracies and hard-born realities — from the heart of the U.S. government's anti-black policies to the very soul of the Black power and liberation movements. Holley’s impeccable research takes what has been handed down orally to the children of the movement and lines it up with what has been factually documented. One way or another we have all been touched by the Shakur family, and here is a testament to the fiery spirit that has sparked the brains of generations to come.” — Saul Williams, author of Said the Shotgun to the Head and The Dead Emcee Scrolls