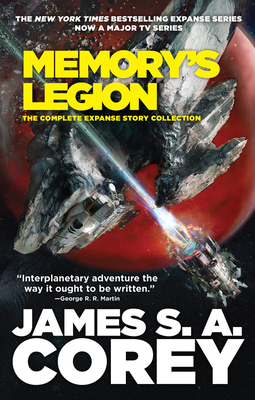 From Leviathan Wakes to Leviathan Falls, James S. A. Corey's Hugo Award-winning Expanse series has redefined modern space opera. Now, available in print for the first time comes the complete collection of short fiction set in the Expanse universe, including both a brand-new novella set after the events of Leviathan Falls and author’s notes on each story.

On Mars, a scientist experiments with a new engine that will one day become the drive that fuels humanity's journey into the stars.

On an asteroid station, a group of prisoners are oblivious to the catastrophe that awaits them.

On a future Earth beset by overpopulation, pollution, and poverty, a crime boss desperately seeks to find a way off planet.

On an alien world, a human family struggles to establish a colony and make a new home.

All these stories and more are featured in this unmissable collection of short fiction set in the hardscrabble world of The Expanse.

Contents:
The Expanse Short Fiction
Drive
The Butcher of Anderson Station
The Churn
Gods of Risk
The Vital Abyss
Strange Dogs
Auberon
The Sins of our Fathers
---
For more from James S. A. Corey, check out:

James S. A. Corey is the pen name of Daniel Abraham and Ty Franck. In addition to writing the novels and short stories of The Expanse, they wrote and produced the television series of the same name. Daniel lives with his family in the American southwest. Ty will tell you where he lives when and if he wants you to come over.

“The stories are creative and inventive, packing the same character driven emotional power of the novels… This collection is a welcome capstone to mark the conclusion of arguably the best space-opera series written in the past few decades.”
—Booklist

"Corey deftly weaves multiple points of view to create a dense and colorful tapestry of political intrigue, personal relationships, and sophisticated technology that bursts with action but also delivers an introspective view of the characters as they age and reflect on their purpose and the value of their lives."—Booklist (starred review) on Tiamat's Wrath

"A standout tale of violence, intrigue, ambition, and hope. ... Corey cranks up the tension relentlessly in this fast-paced story of heroes and rebels fighting for freedom. With enough thrills and intrigue for three Hollywood blockbusters, the novel stands alone nicely, making it easy for new readers as well as diehard series fans to dive right in."
—Publishers Weekly on Nemesis Games

"The science fictional equivalent of A Song of Ice and Fire...only with fewer beheadings and way more spaceships."
—NPR Books on Cibola Burn

"It's been too long since we've had a really kickass space opera. Leviathan Wakes is interplanetary adventure the way it ought to be written, the kind of SF that made me fall in love with the genre way back when, seasoned with a dollop of horror and a dash of noir. Jimmy Corey writes with the energy of a brash newcomer and the polish of a seasoned pro. So where's the second book?"
—George R. R. Martin on Leviathan Wakes