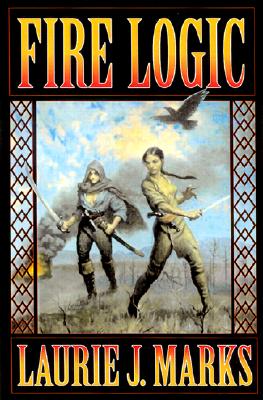 These elements have sustained the peaceful people of Shaftal for generations, with their subtle powers of healing, truth, joy, and intuition.

But now, Shaftal is dying.

The earth witch who ruled Shaftal is dead, leaving no heir. Shaftal's ruling house has been scattered by the invading Sainnites. The Shaftali have mobilized a guerrilla army against these marauders, but every year the cost of resistance grows, leaving Shaftal's fate in the hands of three people: Emil, scholar and reluctant warrior; Zanja, the sole survivor of a slaughtered tribe; and Karis the metalsmith, a half-blood giant whose earth powers can heal, but only when she can muster the strength to hold off her addiction to a deadly drug.

Separately, all they can do is watch as Shaftal falls from prosperity into lawlessness and famine. But if they can find a way to work together, they just may change the course of history.

Laurie J. Marks is a third-generation Californian who came to Massachusetts to go to graduate school and never left. She earned a BA from Brown University and an MA from Northeastern University. Before settling down to teach composition, creative writing, and science fiction at the University of Massachusetts, Boston, she worked with an anti-poverty program in Mexico, was a crisis counselor in domestic violence and rape intervention, and administered and designed programs for a county-wide literacy agency. She serves on the steering committee of Broad Universe, and is a member of SFFWA and the National Council of Teachers of English. She lives in Melrose, Massachusetts.

"A deftly painted story of both cultures and magics in conflict."--Robin Hobb

"Marks is an absolute master of fantasy in this book."--Booklist (starred review)

"A work that is filled with an intelligence that zings off the page."--Publishers Weekly (starred review)