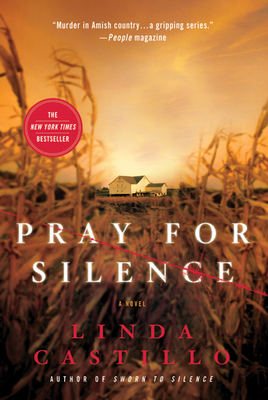 This is book number 2 in the Kate Burkholder series.

“In this sequel to Sworn to Silence, Police Chief Kate Burkholder is faced with the slaughter of an Amish family of seven. Her search for the killer takes her on a dark journey of discovery and uncovers a disturbing realm of violence and brutality. As before, Castillo keeps the pace quick, the story compelling, and her manner towards the Amish reverent.”
— Katherine Osborne, Kennebooks, Kennebunk, ME

One family. One horrific murder. An entire town under suspicion…

The Planks moved from Lancaster County Pennsylvania to the small Amish community of Painters Mill, hoping to resume the comforts of the Plain Life in Ohio. Less than one year later, the family of seven is found dead—slaughtered on their own farm.

"Shades of In Cold Blood . . . Another chilling thriller."—People magazine

Police Chief Kate Burkholder and her small force have few clues, no motive, and no suspect. Formerly Amish herself, Kate is no stranger to the secrets the Amish keep from their "English" neighbors—and each other. When the diary belonging to the rebellious teenager Mary Plank turns up, Kate is surprised to find not only a kindred spirit but a murder suspect: the charismatic stranger who stole Mary's heart.

"Violent and earthy, and completely impossible to put down."—BookPage

Then there's Mary's brother, Aaron. Shunned by his family and the rest of the Amish community, could he have returned to seek revenge? Now it's up to Kate to search for some dark truths about the Planks—and confront long-buried secrets of her own. As Kate's obsession with the case grows so does her resolve to bring the killer to justice—even if it means putting herself into the line of fire . . .

"Will appeal to fans of Karin Slaughter and Tami Hoag."—Library Journal

Linda Castillo is the author of the New York Times and USA Today bestselling Kate Burkholder series, set in the world of the Amish. The first book, Sworn to Silence, was adapted into a Lifetime original movie titled An Amish Murder starring Neve Campbell as Kate Burkholder. Castillo is the recipient of numerous industry awards including a nomination by the International Thriller Writers for Best Hardcover, the Mystery Writers of America’s Sue Grafton Memorial Award, and an appearance on the Boston Globe’s shortlist for best crime novel. In addition to writing, Castillo’s other passion is horses. She lives in Texas with her husband and is currently at work on her next book.

“Though the violence level is high, the brutality is offset by Kate's and her team's very capable police procedure and investigation. Another solid effort that will appeal to fans of Karin Slaughter and Tami Hoag.” —Library Journal

“Another knock-out job. I love this series.” —Alex Kava

“[The] unique setting and a very human heroine make this a good recommendation for readers seeking an alternative to the urban whodunit.” —Booklist

“The second book in Castillo's series is . . . as well crafted, interesting and unique as the first. The combination of Amish life and the brutal work of a police chief create plenty of tension and excitement.” —Romantic Times (Top Pick, 4 1/2 stars)

“With a serial killer and now a mass murder in tiny Painters Mill, Castillo will need to be inventive to maintain the plausibility in this addictive series. Fortunately, she seems up to the task.” —Akron Beacon Journal

“Castillo keeps the pace quick, the story compelling, and her manner towards the Amish reverent.” —Katherine Osborne, Indiebound