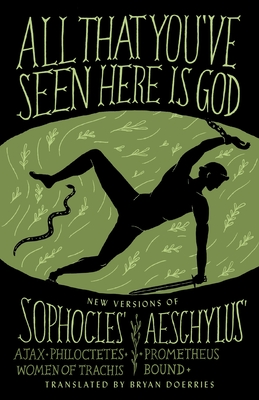 By Bryan Doerries (Translated by), Sophocles, Aeschylus
$17.00
This item is out of stock with our warehouse. Some recently published books may be in stock @ Room. Email to check.

These contemporary translations of four Greek tragedies speak across time and connect readers and audiences with universal themes of war, trauma, suffering, and betrayal. Under the direction of Bryan Doerries, they have been performed for tens of thousands of combat veterans, as well as prison and medical personnel around the world. Striking for their immediacy and emotional impact, Doerries brings to life these ancient plays, like no other translations have before.

Bryan Doerries is a New York-based writer, director, and translator who currently serves as Artistic Director of Theater of War Productions, a company that presents dramatic readings of seminal plays and texts to frame community conversations about pressing issues of public health and social justice. A self-described evangelist for ancient stories and their relevance to our lives today, Doerries uses age-old approaches to help individuals and communities heal from trauma and loss. He is the author of a memoir, The Theater of War: What Ancient Greek Tragedies Can Teach Us Today; All That You’ve Seen Here Is God, four plays by Aeschylus and Sophocles; and The Odyssey of Sergeant Jack Brennan, a graphic novelization of Homer’s Odyssey, told from the point of view of a US Marine returning home from Afghanistan. Among his awards, he has received an honorary Doctorate of Humane Letters from Kenyon College and was named Public Artist in Residence for the City of New York.

“This is a brilliant, original, and harrowing work.” —Andre Gregory

“Knowing that these plays were originally authored by military brass, for an audience long familiar with the effects of war, you have to wonder what questions they were trying to address with their contemporaries. For the past decade, I’ve watched Bryan tirelessly pursue what these questions could have been by bringing these texts to the doorstep of the best modern source material we have, our US military. In so doing, he has created a series of translations that are accessible to both actor and audience, deeply insightful and wholly unique.” —Adam Driver

“Bryan Doerries’ translations of Greek tragedy in All That You’ve Seen Here Is God seriously engage both with four Greek originals by Aeschylus and Sophocles and with his own experience in performing the plays for disparate audiences who have undergone tragic suffering in person. His spare, contemporary yet poetic lines jump from the page to serve an intense delivery that invites his audience to post-play dialogue.” —Helene P. Foley, Professor of Classics, Barnard College, Columbia University

“We live in an age defined by mythic catastrophe.  We live in an age of perpetual war.  We therefore live in an age that requires drama of the stature contained between these covers.  Bryan Doerries’ brave, spare, inspired translations of Sophocles and Aeschylus have the power to bring us into healing confrontation with ancient, brutal, and essential truth.  These are plays for our time.”  —Doug Hughes, Tony-award winning director of Doubt

“Bryan Doerries’ translations roar down the tracks like a raging locomotive. The language is lean, taut, raw, vibrant. The demonic passions of ancient Greek warriors and their thousand-yard stares chase us down and leave no place to hide. The sparse staccato lines jump off the page, onto the stage, into the gut. No wonder Doerries’ revolutionary Theater of War Project has produced such powerful performances at so many theaters over recent years. This is Greek tragedy as combat therapy. There is implicit in these sparse, often unforgiving pages the hope of emotional healing, signs of renewal to be snatched from the shattered souls of wounded warriors and their shell-shocked wives. A riveting read and remarkable accomplishment!” —Stephen Esposito, Assoc. Professor Classical Studies, Boston University

“Bryan Doerries’ translations are as illuminating to read as they are to perform.  They emphasize personal struggle over historical gamesmanship and are translated with emotion and humor that feels not only timely but prescient.”  —Jesse Eisenberg

“Doerries has listened to the pain of the veteran, the patient, and the prisoner and heard the words of Sophocles and Aeschylus.  He gives powerful voice to both in these stark and sensitive translations.”  —Amy R. Cohen,  Editor-in-Chief of Didaskalia: the Journal for Ancient Performance