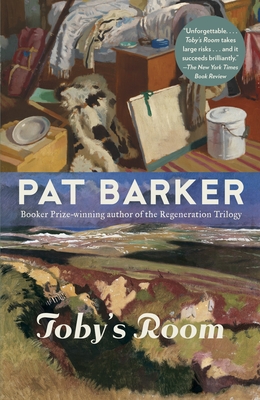 By Pat Barker
Email or call for price
Special Order

This is book number 2 in the Life Class Trilogy series.

Sandi's Rec: Another great book from the British novelist who has made it her life's work to chronicle the costs of WWI. This is a dark and painful tale of strained relationships between brother and sister, friends and lovers against the backdrop of postwar England.

A masterfully written World War I-era novel about the secrets between a brother and sister, from the Booker Prize-winning author of the Regeneration Trilogy.

It is 1917, and Elinor Brooke, a young painter, is studying art in London while her beloved brother Toby serves on the front as a medical officer. When Toby goes missing and is presumed dead, the devastated Elinor refuses to accept it. Then she finds a letter hidden among his belongings; it reveals that Toby knew he wasn’t coming back and implies that his friend, medic Kit Neville, knows why. But Kit has been horribly disfigured and is reeling from shell shock. While Elinor tries to piece together the mystery of what happened to her brother, she uses her drawing skills to aid in the surgical reconstruction of those who have suffered unspeakable losses—of their faces, their memories, their very minds.

Pat Barker is the author of numerous novels, including Noonday, Toby's Room, and Life Class, as well as the highly acclaimed Regeneration Trilogy: Regeneration; The Eye in the Door, winner of the Guardian Fiction Prize; and The Ghost Road, winner of the Booker Prize. She lives in the north of England.

“Breathtakingly good. . . . Barker has written extensively about the Great War . . . yet she’s still coming at it in fresh, powerful ways. This is a writer truly at the height of her powers, and it’s a dizzying height indeed.” —The Toronto Star

“Barker has shown again that she is not only a fine chronicler of war but of human nature.” —The Independent (London)

“Haunting and complicated sibling love is at the heart of [this] novel. . . . The precision of Ms. Barker’s writing shows her again to be one of the finest chroniclers of . . . the First World War.” —The Wall Street Journal

“Gripping and majestic.” —The Daily Beast

“Toby’s Room takes large risks. It’s dark, painful and indelibly grotesque, yet it’s also tender. It strains against its own narrative control to create, in the midst of ordinary life, a kind of deformed reality—precisely to illustrate how everything we call ‘ordinary’ is disfigured by war. And it succeeds brilliantly.” —The New York Times Book Review

“Toby’s Room is the most emotionally powerful and aesthetically daring of her searing about the First World War and British culture.” —The Times Literary Supplement (London)
“An enthralling and uplifting read. Ms. Barker’s fans will hope that, as with the Regeneration trilogy, a third installment is to follow.” —The Economist

“Barker is peerless at evoking the atmosphere of the trenches and of wartime London.” —The Washington Post

“Unsparing and rigorous. . . . For Barker, the wounded faces of the soldier-victims are realities, and also emblems of what must never be forgotten or evaded about war, and must continue—in her plain, steady, compelling voice—to be turned into art.” —The Guardian (London)

“Barker’s writing is subtle and nuanced, even as it is unsentimental in showing the physical and emotional effects of the war. Her mixture of sensitivity and bluntness made her Regeneration trilogy of the 1990s a remarkable work.” —The Philadelphia Inquirer

“This is a powerful book. . . . Barker triumphs.” —San Francisco Chronicle

“No one evokes England in all its stiff-upper-lip gritty wartime privation like Barker. She is . . . determined to render an honest portrayal of war. She will not allow us to sweep it out of sight.” —The Miami Herald

“Difficult to put down. . . . Barker is so deft handling history, from battlefield scenes to surgery in Queen's Hospital, that she has few peers.” —The Plain Dealer