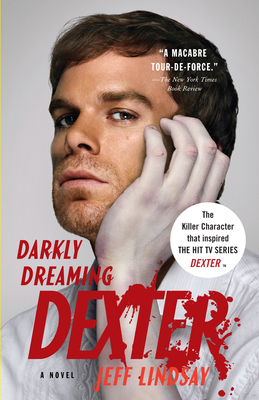 This is book number 1 in the Dexter Series series.

Meet Dexter Morgan, a polite wolf in sheep’s clothing. He’s handsome and charming, but something in his past has made him abide by a different set of rules. He’s a serial killer whose one golden rule makes him immensely likeable: he only kills bad people. • The Killer Character That Inspired the Hit Showtime Series Dexter

And his job as a blood splatter expert for the Miami police department puts him in the perfect position to identify his victims. But when a series of brutal murders bearing a striking similarity to his own style start turning up, Dexter is caught between being flattered and being frightened–of himself or some other fiend.

Jeff Lindsay is the author of Darkly Dreaming Dexter. He lives in South Florida with his wife and three daughters.

"A macabre tour-de-force." —The New York Times Book Review“A dark comedy with a creative twist.”—The Miami Herald“Dark and devious. . . . . Daring and unexpectedly comedic.” —USA Today"Maybe the first serial killer who unabashedly solicits our love." —Entertainment Weekly"With chills like these, you can skip the air-conditioning." —Time"One of the most likeable vigilante serial killers in recent thriller literature." —The New Yorker“Demonology has a dastardly new darling.” —The New York Times “Just when you think (hope?) that the tired and rarely credible device of the serial killer next door has hit a wall, along comes a writer like Jeff Lindsay to prove you wrong. . . . So enjoyable.” —Chicago Tribune“Mordantly funny.” —The New York Post“A fresh, inventive slice of crime fiction that turns the axis of good and evil . . . upside down. A psychological thriller in the best sense of the genre.” —The Sun-Sentinel (Fort Lauderdale, FL)“A memorable debut with a hero who really ought to be in a mental institution, but is too much fun to lock up.” —The Rocky Mountain News (Denver, CO)“Dexter’s captivating, first-person account is a genuinely exciting read.” —Time Out (NY)“This ghoulish, fascinating tale . . . will grip readers and make a lasting impression.” —The Philadelphia Inquirer“Entertaining. . . . Dexter is a fascinating character, though he’s not the kind of guy you’d like to invite to dinner.” —Chicago Sun-Times"Fun, terrifically fresh. . . . It's thrilling to watch Dexter struggle between everyday vanilla reality and the compelling, kaleidoscopic thrall of his own bloody fantasies." —Linda Marotta, Fangoria“Totally captivating. . . . Totally original. The characters are beautifully drawn, particularly Dexter, who is tremendously likeable, his hobby not withstanding.” —The St. Petersburg Times (FL)“Lindsay gets high marks for originality, atmosphere, vibrant action scenes and having the brass to write this in the first place.” —Tulsa World“Jeff Lindsay sure does it right with Darkly Dreaming Dexter.” —Cleveland Plain Dealer“Newcomer Jeff Lindsay has created a unique hero. . . . Intriguing.” —Mystery Scene“In creating a singularly unique killer, Lindsay also manages to create a few sleepless nights for the reader.” —Anniston Star (Anniston, AL)