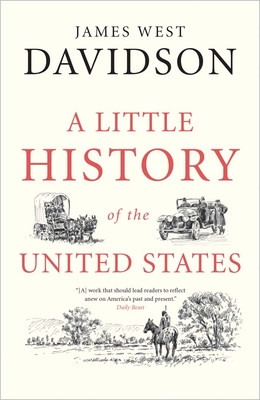 By James West Davidson
$16.95
This item is out of stock with our warehouse. Some recently published books may be in stock @ Room. Email to check.

"This is a little history with a big heart, meant to be savored more than studied, read out loud like poetry, or perhaps sung like a hymn."—Joseph J. Ellis, author of Founding Brothers

"Davidson has written a work that should lead readers to reflect anew on America’s past and present. . . . We can all use not just a good refresher course on American history, but also some good historical thinking on how we might better realize freedom, equality, and E pluribus unum."—The Daily Beast

A fast-paced, character-filled history that brings the unique American saga to life for readers of all ages

How did a land and people of such immense diversity come together under a banner of freedom and equality to form one of the most remarkable nations in the world? Everyone from young adults to grandparents will be fascinated by the answers uncovered in James West Davidson’s vividly told A Little History of the United States. In 300 fast-moving pages, Davidson guides his readers through 500 years, from the first contact between the two halves of the world to the rise of America as a superpower in an era of atomic perils and diminishing resources.

In short, vivid chapters the book brings to life hundreds of individuals whose stories are part of the larger American story. Pilgrim William Bradford stumbles into an Indian deer trap on his first day in America; Harriet Tubman lets loose a pair of chickens to divert attention from escaping slaves; the toddler Andrew Carnegie, later an ambitious industrial magnate, gobbles his oatmeal with a spoon in each hand. Such stories are riveting in themselves, but they also spark larger questions to ponder about freedom, equality, and unity in the context of a nation that is, and always has been, remarkably divided and diverse.

James West Davidson, a widely respected historian, has written on American history and the detective work that goes into it, as well as books about the outdoors. He lives in Rhinebeck, NY.

"Davidson has written a work that should lead readers to reflect anew on America’s past and present . . . We can all use not just a good refresher course on American history, but also some good historical thinking on how we might better realize freedom, equality, and E pluribus unum."—The Daily Beast

"Davidson . . . opens this smooth overview of 500 years of American history, beginning with Columbus’s arrival, with an engaging premise, arguing that we all make our own history pieced together out of personal memories, which in turn become the warp and weft of the cloth of history."—Publishers Weekly

"This attractive, eminently readable account covers the United States, from founding times to the current day . . . Seldom has this story been told from such an approachable viewpoint. Students will flock to the book."—Library Journal

"Davidson takes familiar stories from America's past and adds novelistic flair. . . . From the first pages, the author shows enthusiasm for his project, describing the difference between people who 'make' history and people who 'write' it."—Kirkus Reviews

"This is a clear, at times dramatic . . . traditional historical narrative that can serve well as an introductory text."—Booklist

"To the ranks of Yale’s series of 'little' histories (art, science, the world, etc.) James West Davidson now adds his pithy and surprisingly sharp A Little History of the United States, which despite its title begins its story well before the thirteen American colonies declared their independence from Great Britain."—Open Letters Monthly

"A lively, not-so-little look at the little ways that people from all walks of life, cultures, backgrounds, and incomes came together to make a nation."—Q Salt Lake Magazine

"[Davidson’s] ability to weave anecdotes and an accessible writing style into a clear and concise illustration of a cultural trend or political movement is enviable."—Civil War Book Review

"This is a little history with a big heart, meant to be savored more than studied, read out loud like poetry, or perhaps sung like a hymn."—Joseph J. Ellis, author of Founding Brothers

"With imagination, verve and stylishness, James Davidson distills American history into its compelling essence. For newcomers to the subject, an incomparable primer; for veterans, the familiar made fresh with judicious insight."—H. W. Brands, University of Texas at Austin

"A book of literary grace and narrative invention. Not only the writing but also the conceptualization consistently engage the reader. Uncommonly imaginative."—Christine Heyrman, author of Southern Cross and American Apostles

"A persuasive and enjoyable read. Davidson faced a herculean task in condensing more than five hundred years of history into a slim volume. He fulfills this difficult brief with authority and brio."—Richard Aldous, author of Reagan and Thatcher: The Difficult Relationship

"It has a little of Zinn, a little of Lies My Teacher Told Me, and a little of History of US. I found it readable, interesting, and useful."—Sandy Foster, U.S. history teacher, The Harley School