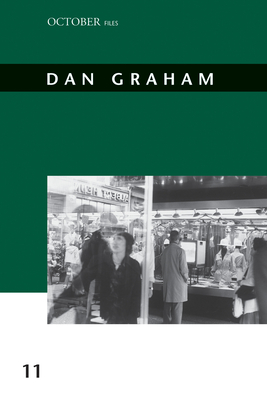 By Alex Kitnick (Editor)
$25.00
This item is out of stock with our warehouse. Some recently published books may be in stock @ Room. Email to check.

A collection of essays on a key figure in postminimalist art, with texts spanning thirty years.

Since the 1960s, Dan Graham's heterogeneous practice has touched on such disparate subjects as tract housing, the Shakers, punk music, and architectural theory; he has made videos, architectural models, closed-circuit installations, and glass pavilions. Graham, who came of age during the emergence of earth art, minimalism, and conceptualism, has situated his work on the borders between these different strains of contemporary practice. Although varying widely in subject and medium, Graham's artwork and writings display a consistent interest in spectatorship, public-private relationships, and the constructed environment. Graham's extensive writings on his own work (collected in Rock My Religion and Two-Way Mirror Power, both published by the MIT Press) have made him, by default, the primary interpreter of his own art. This October Files volume provides a counterweight, gathering key texts by critics and theorists that offer alternative accounts of Graham's art. The essays span thirty years and include hard-to-find texts from exhibition catalogs and journals. The authors include such distinguished theorists, critics, and artists as Benjamin H. D. Buchloh, Beatriz Colomina, Thierry de Duve, and Jeff Wall.

Alex Kitnick, a PhD candidate in the Department of Art and Architecture at Princeton University, has taught at the School of Visual Arts and Vassar College.