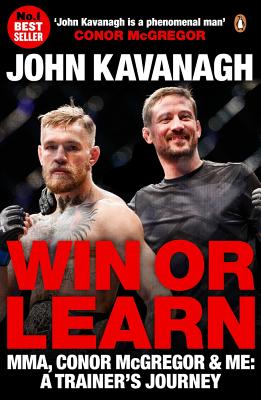 Growing up in Dublin, John Kavanagh was frequently bullied. As a young man, after suffering a bad beating when he intervened to help a woman who was being attacked, he decided he had to learn to defend himself. Before long, he was training fighters in a tiny shed, and promoting the earliest mixed-martial arts events in Ireland. And then, a cocky kid called Conor McGregor walked into his gym. Here, John Kavanagh tells his own remarkable life story—which is at the heart of the story of the extraordinary explosion of MMA in Ireland and globally. Employing the motto "win or learn," Kavanagh has become a guru to young men and women seeking to master the arts of combat. And as the trainer of the world's most charismatic champion, his gym has become a magnet for talented fighters from all over the globe. Kavanagh's portrait of Conor McGregor—who he has seen in his lowest moments, as well as in his greatest triumphs—is a revelation. What emerges is a remarkable portrait of ambition, discipline, and persistence in the face of years and years of disappointment. It is a must read for every MMA fan—but also for anyone who wants to understand how to follow a dream and realize a vision.

"For anyone interested in following their dream to the end of the line." —Tony Parsons

"Kavanagh is open and honest about his upbringing . . . The journey hasn't been easy, but Kavanagh's inbuilt determination has carried him all the way." —Irish Examiner

"It kept me up well past my bedtime." —Sean O'Rourke, RTE Radio One