The Devil's Cloth: A History of Stripes and Striped Fabric (Hardcover) 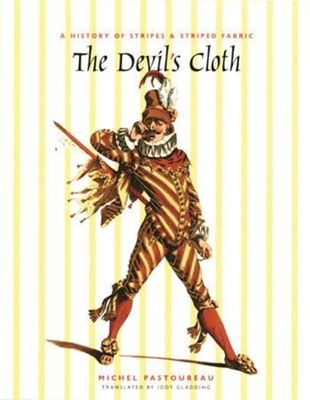 By Michel Pastoureau, Jody Gladding (Translator)
This item is not available to order from Room.

Michel Pastoureau's lively study of stripes offers a unique and engaging perspective on the evolution of fashion, taste, and visual codes in Western culture. The Devil's Cloth begins with a medieval scandal. When the first Carmelites arrived in France from the Holy Land, the religious order required its members to wear striped habits, prompting turmoil and denunciations in the West that lasted fifty years until the order was forced to accept a quiet, solid color. The medieval eye found any surface in which a background could not be distinguished from a foreground disturbing. Thus, striped clothing was relegated to those on the margins or outside the social order--jugglers and prostitutes, for example--and in medieval paintings the devil himself is often depicted wearing stripes. The West has long continued to dress its slaves and servants, its crewmen and convicts in stripes. But in the last two centuries, stripes have also taken on new, positive meanings, connoting freedom, youth, playfulness, and pleasure. Witness the revolutionary stripes on the French and United States flags. In a wide-ranging discussion that touches on zebras, awnings, and pajamas, augmented by illustrative plates, the author shows us how stripes have become chic, and even, in the case of bankers' pin stripes, a symbol of taste and status. However, make the stripes too wide, and you have a gangster's suit--the devil's cloth indeed.

Michel Pastoureau is a leading authority on medieval heraldry. He is the coauthor of The Bible and the Saints and Heraldry: An Introduction to a Noble Tradition.