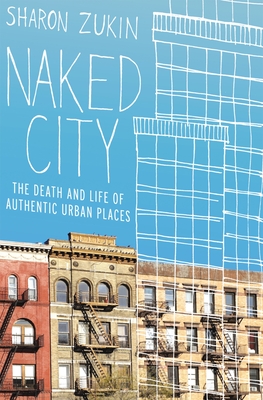 By Sharon Zukin
$23.95
Usually Ships in 2-7 Days
All sales of this book are final--it is print on demand and may take up to 2 weeks to arrive.

As cities have gentrified, educated urbanites have come to prize what they regard as "authentic" urban life: aging buildings, art galleries, small boutiques, upscale food markets, neighborhood old-timers, funky ethnic restaurants, and old, family-owned shops. These signify a place's authenticity, in contrast to the bland standardization of the suburbs and exurbs. But as Sharon Zukin shows in Naked City, the rapid and pervasive demand for authenticity--evident in escalating real estate prices, expensive stores, and closely monitored urban streetscapes--has helped drive out the very people who first lent a neighborhood its authentic aura: immigrants, the working class, and artists. Zukin traces this economic and social evolution in six archetypal New York areas--Williamsburg, Harlem, the East Village, Union Square, Red Hook, and the city's community gardens--and travels to both the city's first IKEA store and the World Trade Center site. She shows that for followers of Jane Jacobs, this transformation is a perversion of what was supposed to happen. Indeed, Naked City is a sobering update of Jacobs' legendary 1961 book, The Death and Life of Great American Cities. Like Jacobs, Zukin looks at what gives neighborhoods a sense of place, but argues that over time, the emphasis on neighborhood distinctiveness has become a tool of economic elites to drive up real estate values and effectively force out the neighborhood "characters" that Jacobs so evocatively idealized.

Sharon Zukin is Professor of Sociology at Brooklyn College and the City University of New York Graduate Center. She is the author of Loft Living (the classic book on SoHo's gentrification), Landscapes of Power (winner of the C. Wright Mills Award), The Cultures of Cities, and Point of Purchase.