A Cabinet of Byzantine Curiosities: Strange Tales and Surprising Facts from History's Most Orthodox Empire (Hardcover) 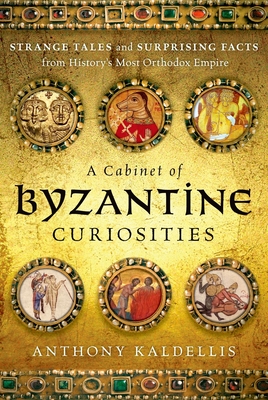 Weird, decadent, degenerate, racially mixed, superstitious, theocratic, effeminate, and even hyper-literate, Byzantium has long been regarded by many as one big curiosity. According to Voltaire, it represented "a worthless collection of miracles, a disgrace for the human mind"; for Hegel, it was "a disgusting picture of imbecility." A Cabinet of Byzantine Curiosities will churn up these old prejudices, while also stimulating a deeper interest among readers in one of history's most interesting civilizations. Many of the zanier tales and trivia that are collected here revolve around the political and religious life of Byzantium. Thus, stories of saints, relics, and their miracles-from the hilarious to the revolting-abound. Byzantine bureaucracy (whence the adjective "Byzantine"), court scandals, and elaborate penal code are world famous. And what would Byzantium be without its eunuchs, whose ambiguous gender produced odd and risible outcomes in different contexts? The book also contains sections on daily life that are equally eye-opening, including food (from aphrodisiacs to fermented fish sauce), games such as polo and acrobatics, and obnoxious views of foreigners and others (e.g., Germans, Catholics, Arabs, dwarves). But lest we overlook Byzantium's more honorable contributions to civilization, also included are
some of the marvels of Byzantine science and technology, from the military (flamethrowers and hand grenades) to the theatrical ("elevator" thrones, roaring mechanical lions) and medical (catheters and cures, some bizarre). This vast assortment of historical anomaly and absurdity sheds vital light on one of history's most obscure and orthodox empires.

Anthony Kaldellis is Professor of Classics at The Ohio State University, and the author of The Christian Parthenon: Classicism and Pilgrimage in Byzantine Athens, Hellenism in Byzantium: The Transformations of Greek Identity and the Reception of the Classical Tradition, and Streams of Gold, Rivers of Blood: The Rise and Fall of Byzantium, 955 A.D. to the First Crusade.