The Chris Farley Show: A Biography in Three Acts (Paperback) 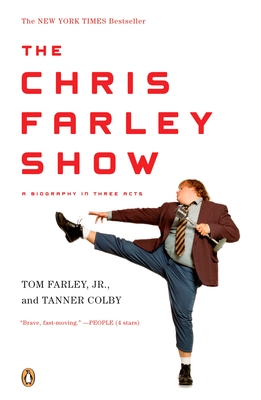 After three years of sobriety, Chris Farley's life was at its creative peak until a string of professional disappointments chased him back to drugs and alcohol. He fought hard against them, but it was a fight he would lose in December 1997. Farley's fans immediately drew parallels between his death and that of his idol, John Belushi. Without looking deeper, however, many failed to see that Farley was much more than just another Hollywood drug overdose. In this officially authorized oral history, Farley's friends and family remember his work and life. Along the way, they tell a remarkable story of boundless energy, determination, and laughter that could only keep the demons at bay for so long.

Tanner Colby is former head writer of the National Lampoon Radio Hour, and coauthor of Belushi: A Biography. He lives in New York City.

"What you'll love: the book's intimate accounts give as much time to Farley's sensitive nature and generosity of spirit as they do to his ugliest moments."
-The Washington Post

"Farley has no shortage of support and admirers . . . the compilation of direct quotes from his loved ones makes for powerful reading and provides a more forceful reminder of how terrifying addiction can be."
-Playboy