How Music Got Free: A Story of Obsession and Invention (Paperback) 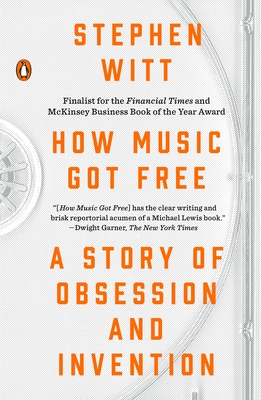 Soon to be an Apple TV+ documentary series

One of Billboard’s 100 Greatest Music Books of All Time

Finalist for the Los Angeles Times Book Prize, the J. Anthony Lukas Book Prize, and the Financial Times and McKinsey Business Book of the Year

ONE OF THE YEAR'S BEST BOOKS: The Washington Post • The Financial Times • Slate • The Atlantic • Time • Forbes

“[How Music Got Free] has the clear writing and brisk reportorial acumen of a Michael Lewis book.”—Dwight Garner, The New York Times

What happens when an entire generation commits the same crime?

How Music Got Free is a riveting story of obsession, music, crime, and money, featuring visionaries and criminals, moguls and tech-savvy teenagers. It’s about the greatest pirate in history, the most powerful executive in the music business, a revolutionary invention and an illegal website four times the size of the iTunes Music Store.

Journalist Stephen Witt traces the secret history of digital music piracy, from the German audio engineers who invented the mp3, to a North Carolina compact-disc manufacturing plant where factory worker Dell Glover leaked nearly two thousand albums over the course of a decade, to the high-rises of midtown Manhattan where music executive Doug Morris cornered the global market on rap, and, finally, into the darkest recesses of the Internet.

Through these interwoven narratives, Witt has written a thrilling book that depicts the moment in history when ordinary life became forever entwined with the world online—when, suddenly, all the music ever recorded was available for free. In the page-turning tradition of writers like Michael Lewis and Lawrence Wright, Witt’s deeply reported first book introduces the unforgettable characters—inventors, executives, factory workers, and smugglers—who revolutionized an entire artform, and reveals for the first time the secret underworld of media pirates that transformed our digital lives.

An irresistible never-before-told story of greed, cunning, genius, and deceit, How Music Got Free isn’t just a story of the music industry—it’s a must-read history of the Internet itself.

Stephen Witt was born in New Hampshire in 1979 and raised in the Midwest. He graduated from the University of Chicago with a degree in mathematics in 2001. He spent the next six years playing the stock market, working for hedge funds in Chicago and New York. Following a two-year stint in East Africa working in economic development, he graduated from Columbia University’s Graduate School of Journalism in 2011. He lives in Brooklyn, New York.

“The richest explanation to date about how the arrival of the MP3 upended almost everything about how music is distributed, consumed and stored. It’s a story you may think you know, but Mr. Witt brings fresh reporting to bear, and complicates things in terrific ways. . . . [How Music Got Free] has the clear writing and brisk reportorial acumen of a Michael Lewis book.”
—Dwight Garner, The New York Times

“Taut, cleareyed. . . . Witt, a first-time author, comes from the world of finance, and his old-fashioned, connect-the-dots reporting presents a nuanced depiction of an issue usually reduced to emotional absolutes. . . . [A] complex, groundbreaking story.”
—The New York Times Book Review

“A lucid, mordantly funny account of the rise of digital music piracy, starting with the story of a worker in a North Carolina CD-pressing plant who personally leaked more than 2,000 albums over eight years.”
—Time magazine

“Witt’s book is more than just a simple history — or defense — of file sharing, a development most people associate with Napster, but which, according to Witt, involved a much more wide-ranging—and fascinating—story.”
—The Seattle Times

“A must-read on the rise of privacy. . . . Suspenseful, entertaining. . . . Essential reading for all students of the music business.”
—Billboard

“Incredible, possibly canonical. . . . A story that's too bizarre to make up, but needed to be told. . . . Even if you're not a music geek, How Music Got Free is one of the most gripping investigative books of the year.”
—Vice

“How Music Got Free doubles as a detailed ode to the MP3 as it tells the story of three men grappling with digital compression technology and its widespread fallout. . . . According to Witt’s account, these three relatively unknown figures spurred on the tectonic shifts within the music industry over the last few decades and changed how we listen to and consider music today. . . . How Music Got Free tells of supreme innovation as well as stubborn hard-headedness, and though its trio of principle characters never actually cross paths in real life, it’s tempting to consider what would have happened if they did, what crises may have been avoided.”
—Pitchfork.com

“The story of the music industry’s epic struggle with the technological developments that swiftly and irrevocably changed it forever. . . . Recounted by Witt with the clarity and momentum of any fictional page-turner.”
—The Fader

“Witt uncovers the largely untold stories of people like the German entrepreneurs who invented the mp3 file and Dell Glover, the compact disc factory worker who leaked some of the biggest albums of the aughts, leaving record label execs frustrated and scared.”
—Business Insider

“An enthralling account of how technology has turned the music business upside down . . . This is a terrific, timely, informative book.”
—Nick Hornby, The Sunday Times (UK)

“[Witt] organizes his narrative around alternating chapters that each focus on a separate protagonist: an engineer, an executive, and a criminal: Universal chairman Doug Morris and two nemeses Morris didn’t even know he had: German engineer Karlheinz Brandenburg, and music pirate Dell Glover, a Polygram/Universal employee at the Tennessee CD manufacturing plant.”
—The Daily Beast

“How Music Got Free is the result of five years of tunnel-vision focus on the history of digital music.”
—The Village Voice

“[An] excellent history of the MP3 and its effect on the recording industry. . . . An essential read for musicians.”
—John Colpitts, The Talkhouse

“A captivating new book that unearths the story of mp3s, pirates and a recalcitrant music business.”
—Lincoln Journal Star

“[A] fascinating account of the rise of music piracy. . . . An engrossing story. . . . The year's most important music book.”
—The Independent (UK)

“A virtuosic, briskly readable account of when the music industry was briefly, seemingly, brought to its knees. . . . There's a lot to learn from the music business' antagonistic relationship with the technology that defined it, and Witt lays it all out on the page.”
—The Portland Mercury

“The story of how the Internet brought the imperious music business to its knees has never been told more succinctly and readably than it is here. . . . How Music Got Free cries out for a movie treatment like The Social Network.”
—BookPage

“A fascinating peek behind the scenes of a worldwide cultural phenomenon that blew apart the music business structure while at the same time creating a new one in which no one company holds all the cards (though a few of them still hold plenty). . . . An engaging account of how the music industry had to change in order to survive, thanks to the efforts of a few technologically savvy people from diverse backgrounds.”
—Shelf Awareness for Readers

“A riveting detective story . . . Witt’s exposé of the business of mainstream music will intrigue fans and critics of pop culture and anyone who has bought a compact disc, downloaded an MP3, or used a streaming music service.”
—Library Journal

“A propulsive and fascinating portrait of the people who helped upend an industry and challenge how music and media are consumed.”
—Kirkus Reviews

“How Music Got Free is as much a story about greed, friendship, genius and stupidity as it is about music piracy. And it tells an amazing story of a part of the Internet (not to mention the criminal underground) that I took for granted.  I burned through it--you will too.”
—Christian Rudder, author of Dataclysm