They Don't Represent Us: Reclaiming Our Democracy (Hardcover) 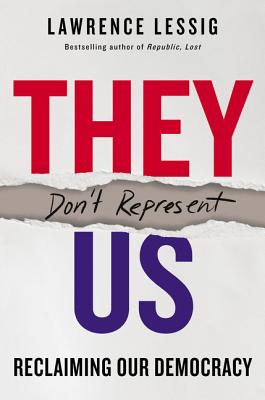 “This urgent book offers not only a clear-eyed explanation of the forces that broke our politics, but a thoughtful and, yes, patriotic vision of how we create a government that’s truly by and for the people.”—DAVID DALEY, bestselling author of Ratf**ked and Unrigged

In the vein of On Tyranny and How Democracies Die, the bestselling author of Republic, Lost argues with insight and urgency that our democracy no longer represents us and shows that reform is both necessary and possible.

America’s democracy is in crisis. Along many dimensions, a single flaw—unrepresentativeness—has detached our government from the people. And as a people, our fractured partisanship and ignorance on critical issues drive our leaders to stake out ever more extreme positions.

In They Don’t Represent Us, Harvard law professor Lawrence Lessig charts the way in which the fundamental institutions of our democracy, including our media, respond to narrow interests rather than to the needs and wishes of the nation’s citizenry. But the blame does not only lie with “them”—Washington’s politicians and power brokers, Lessig argues. The problem is also “us.” “We the people” are increasingly uninformed about the issues, while ubiquitous political polling exacerbates the problem, reflecting and normalizing our ignorance and feeding it back into the system as representative of our will.

What we need, Lessig contends, is a series of reforms, from governmental institutions to the public itself, including:

A soul-searching and incisive examination of our failing political culture, this nonpartisan call to arms speaks to every citizen, offering a far-reaching platform for reform that could save our democracy and make it work for all of us.

Lawrence Lessig is the Roy L. Furman Professor of Law and Leadership at Harvard Law School, host of the podcast Another Way, founder of equalcitizens.us, and co-founder of Creative Commons. He clerked for Judge Richard Posner on the 7th Circuit Court of Appeals and Justice Antonin Scalia on the United States Supreme Court. Lessig has received numerous awards, including a Webby Life Time Achievement Award, the Free Software Foundation's Freedom Award, the Fastcase 50 Award, and he was named one of Scientific American's Top 50 Visionaries. He is a member of the American Academy of Arts and Sciences, and the American Philosophical Society, and the author of ten books, including Republic, Lost. He lives in Brookline, Massachusetts.

“An impassioned call to all Americans to fight for equal representation.”
— Kirkus Reviews

“This bracing report on the state of American politics offers valuable insights for the 2020 elections.”
— Publishers Weekly

“A thoughtful, illuminating, nonpartisan, and pragmatic analysis of the changes needed to restore power to the public… In this bold and compelling book, Lessig both scrutinizes the laws and forces that led us to this point and guides us towards visionary changes that can reset and restore our faith in our democracy. Given the complexities of the tasks at hand, this a must-read and a much-needed wake up call.”
— Booklist

“Lessig tells it with skill, citing a plethora of studies and historical examples to make a persuasive case about the unrepresentativeness of America’s political institutions.”
— New York Time Book Review

“Lessig paints a searing portrait of a defective political system that is nonetheless full of hope, community spirit, self-empowered individuals, and ways to fix what is broken.”
— Foreign Affairs

“Lessig is right that a representative American democracy, desirable in itself, would also solve most of the problems that now seem insoluble. It is hard to imagine a more thoughtful and appealing companion in the hard work to move our system to where it ought to be: in our own hands.”
— Timothy Snyder, bestselling author of On Tyranny and The Road to Unfreedom

“Lessig, a leading proponent of campaign finance reform, now aims at something even bigger: fixing our broken system of representative democracy. This book is brimming with promising and provocative proposals to fix campaign finance, gerrymandering, the electoral college, the filibuster, and the mind-numbing effects of cable news and social media. It is a bold and bracing repair manual for government of, by, and for the people.”
— Michael J. Sandel, bestselling author of What Money Can’t Buy

“Lessig is a modern-day Paul Revere with a warning we must heed: Our representative democracy no longer represents us. The change we need is deep and serious. And it can’t be fixed with by one election, party, or politician. This urgent book offers not only a clear-eyed explanation of the forces that broke our politics, but a thoughtful and, yes, patriotic vision of how we create a government that’s truly by and for the people. We ignore his alarm at our own peril.”
— David Daley, bestselling author of Ratf**ked and Unrigged

“Everything Lessig writes should be carefully read. Read it, consider it, and most important, act on it. Our democracy is at stake.”
— Nancy MacLean, bestselling author of Democracy in Chains

“The American experiment in representative government is on life support. In his brilliant book, Lessig provides the medical record and a recommended course of care to save the patient.  Every American should read it ... stat!”
— Roger McNamee bestselling author of Zucked

“Full of original, provocative insights and surprising stories, this book is for all who seek to create effective democracy in America.”
— Frances Moore Lappé, bestselling author of Diet for a Small Planet and coauthor with Adam Eichen of Daring Democracy

“Lessig proposes the making of a nonpartisan politics to breathe life into the corpse of America’s dysfunctional democracy. He does so with fierce and plainspoken clarity. A challenging work of the political imagination, unsweetened with pious cant.”
— Lewis H. Lapham, editor and founder of Lapham’s Quarterly

“Lessig is the thinking man’s popular reformer and this book is a powerful, patriotic and above all useful guide to the fixes for American representative democracy. Agree or disagree, it every citizen should read this book.”
— Tim Wu, bestselling author of The Curse of Bigness

“Lessig has long been the leading voice on how corruption undermines American democracy. In this book, he trains his trademark wit and incisiveness on an even bigger problem: Our political institutions, he shows, are deeply unrepresentative. Thankfully, Lessig has an original plan for how to build on the principles of the Founding Fathers to make our institutions serve all Americans.”
— Yascha Mounk, author of The People vs. Democracy

“American democracy is buckling under the weight of the public’s deep cynicism. Lessig’s book brings clarity to the many factors feeding this civic deterioration, from our warped campaign finance system to the increasingly balkanized media to the pernicious power of our ‘vetocracy.’ Charting a new course that can revitalize our Republic will demand a reckoning with these deep-seated challenges. This book is a clarion call to do just that.”
— Representative John P. Sarbanes

“This book is a tour de force by one of America’s most interesting thinkers about democracy. Lessig finds democratic sclerosis not only in the institutions and arrangements of government, but also among we the people. Although Lessig considers familiar policy proposals such as campaign finance reform and breaking up social media monopolies, conventional reforms are far from enough to solve the problem of a democracy under extreme stress. He offers proposals aimed at getting us out of our silos, educated, organized, and deliberating toward a more perfect union.”
— Richard L. Hasen, author of Election Meltdown

“This book brilliantly diagnoses some of the fundamental ailments of American democracy. Lessig provides an original and illuminating analysis of how we have been led astray by our reliance on public opinion polling in a fractured media and social media landscape. This book is a must-read for anyone trying to understand — and indeed hoping to reclaim — our democracy.”
— Deb Roy, Professor of Media Arts & Sciences, MIT and Co-founder & Executive Chairman, Cortico

“In classic Lessig fashion, this book connects one of society’s biggest challenges—the impact of technology on our society and democracy—to the evolution of our constitution to show how we’ve lost our voice in our system of government. But as the reader descends into a spiral of despair, he pulls them up with the hope of potential interventions that could successfully enact positive change.”
— Joi Ito, Director, MIT Media Lab

“Lessig has long been a leader in the fight to save our democracy. In this book, Larry again brings his characteristic, inspirational passion and insight to the most pressing challenge of our time—the fate of our Republic.  His new insights into “unrepresentativeness” are a distinctive contribution to the national discussion—in particular, his contention that the problem is not just “they” but also “us”.  If you’re concerned about our democracy, it’s a proverbial must-read.  And along with his deep thinking, Larry brings a keen sense of humor and awareness of the absurd that made us wryly chuckle out loud.”
— Katherine M. Gehl and Michael E. Porter, authors of Why Competition in the Politics Industry Is Failing America: A strategy for reinvigorating our democracy.

“Lessig eloquently advances his diagnosis of our democratic condition. He then helps us understand how remedies might be possible. A book of lasting importance.”
— James Fishkin, Stanford University professor and author of Democracy When the People Are Thinking

“A sweeping analysis by one of America’s most astute and passionate political voices. Lessig shows how America suffers both from a dysfunctional government and from the deficiencies of an increasingly polarized and poorly-informed public. More importantly, he points us toward the reforms we need to repair our representative democracy by making elected officials more responsive to the public and making the public more worthy of responding to. A compelling new contribution to the most important discussion of our time.”
— Martin Gilens, Professor of Public Policy, UCLA Luskin School of Public Affairs