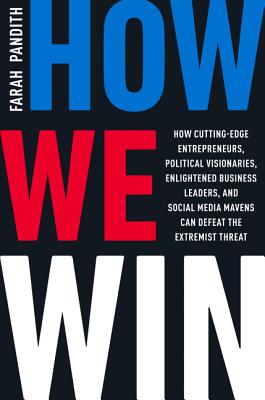 By Farah Pandith
Email or call for price
Special Order

“Drawing on her decades of experience, Pandith unweaves the tangled web of extremism and demonstrates how government officials, tech CEOs, and concerned citizens alike can do their part to defeat it.” – Former Secretary of State Madeleine K. Albright

There is a war being fought, and we are losing it.

Despite the billions of dollars spent since 9/11 trying to defeat terrorist organizations, the so-called Islamic State, Al Qaeda, and other groups remain a terrifying geopolitical threat. In some ways the threat has grown worse: The 9/11 hijackers came from far away; the danger today can come from anywhere—from the other side of the world to across the street. Unable to stem recruitment, we seem doomed to a worsening struggle with a constantly evolving enemy that remains several steps ahead of us. Unfortunately, current policies seem almost guaranteed not to reduce extremist violence but instead to make it easier for terrorists to spread their hateful ideas, recruit new members, and carry out attacks.

We actually possess the means right now to inoculate communities against extremist ideologies. In How We Win, Farah Pandith presents a revolutionary new analysis of global extremism as well as powerful but seldom-used strategies for vanquishing it. Drawing on her visits to eighty countries, the hundreds of interviews and focus groups she’s conducted around the world, and her high-level experience in the Bush and Obama administrations, Pandith argues for a paradigm shift in our approach to combat extremism, one that mobilizes the expertise and resources of diplomats, corporate leaders, mental health experts, social scientists, entrepreneurs, local communities, and, most of all, global youth themselves.

There is a war being fought, and we can win it. This is how.

Farah Pandith is a world-leading expert and pioneer on countering violent extremism (CVE). She served as a political appointee in the George H.W. Bush, George W. Bush, and Barack Obama administrations on the National Security Council, at the U.S. Agency for International Development and the U.S. Department of State. Most recently she was the first-ever Special Representative to Muslim Communities (2009-2014). Her book is How We Win: How Cutting-Edge Entrepreneurs, Political Visionaries, Enlightened Business Leaders, and Social Media Mavens Can Defeat the Extremist Threat. Prior to re-entering government in the aftermath of the 9/11 attacks, Ms. Pandith was Vice President of International Business at ML Strategies, LLC. She is a frequent media commentator and public speaker. She advises government, business and civil society on CVE. She is a senior fellow at Harvard University’s Belfer Center for Science and International Affairs at the Kennedy School, an adjunct senior fellow at the Council on Foreign Relations, and senior advisor at the Institute for Strategic Dialogue. She served on the secretary of homeland security’s Homeland Security Advisory Council (HSAC) from 2015 to 2017, where she also chaired the HSAC subcommittee on countering violent extremism and delivered a report in June 2016. Most recently, the Muhammad Ali Center named Pandith the first-ever Muhammad Ali Global Peace Laureate for her proven track record of and commitment to promoting diversity, cohesion and respect.

“Drawing on her decades of experience, Pandith unweaves the tangled web of extremism and demonstrates how government officials, tech CEOs, and concerned citizens alike can do their part to defeat it.”
— Former Secretary of State Madeleine K. Albright

“A leader in countering violent extremism, Farah Pandith’s voice is needed now more than ever.  Her book How We Win is filled with inspiring stories and proactive solutions on how to defeat extremist ideologies. It is essential reading for all of us.”
— Hillary Rodham Clinton

“Farah Pandith draws on her wide-ranging experience as a diplomat and communicator to lay out a comprehensive strategy against violent extremism. A timely book for government and civil society leaders.”
— Michael Chertoff, former U.S. Secretary of Homeland Security and Cofounder and Executive Chairman of the Chertoff Group

“The private sector has a vital role to play in stopping violent extremism. Farah Pandith’s revelatory How We Win is the playbook we’ve been waiting for. Read it and join in. Farah has much to tell us. The world will benefit from her insights.”
— Shelly Lazarus, Chairman Emeritus, Ogilvy & Mather

“Farah has written a vitally important book on an incredibly important topic that for too long has received short shrift. Every policy maker involved in national security and foreign affairs needs to focus on how we still face a generational ideological challenge.”
— Michael Leiter, former Director of the U.S. National Counterterrorism Center

“For decades, policy makers, academics, and community leaders have struggled with the question How do people of good faith stop extremism in their midst? Pandith doesn’t just ask the question but provides—for the first time—a concrete, detailed, and engaging answer.”
— Juliette Kayyem, former Assistant Secretary at the Department of Homeland Security and Faculty Chair of the Homeland Security Project at the Harvard Kennedy School of Government

“Farah Pandith offers a much-needed critique of nearly two decades of failed American efforts to counter violent extremist ideology. More important, she charts a thoughtful alternative course that demands the attention of policy makers and practitioners in the United States and around the world.”
— William J. Burns, President of the Carnegie Endowment for International Peace, former U.S. Deputy Secretary of State, and former U.S. Ambassador to Russia and Jordan

“Essential for anyone who cares about security and the resilience of democratic values.”
— Leon E. Panetta, former U.S. Secretary of Defense and former CIA Director

“As former Supreme Allied Commander of NATO, I was on the front lines of the war against violent extremists….I wish I’d had Farah Pandith’s groundbreaking book then, and I hope that everyone concerned with stopping extremist violence and destruction will read it now.”
— Admiral James Stavridis, U.S. Navy (Ret.), former Supreme Allied Commander of NATO

“When the threat of terrorism triggers our instincts to lock ourselves down or shout each other down, Ms. Pandith tells us to suit up and open up. Having survived from the frontlines of bureaucratic infighting, she optimistically calls us to be outgoing.”
— Matthew Barzun, former U.S. Ambassador to the United Kingdom and Sweden and former Chief Strategy Officer at CNET Networks

“No one knows more about the appeal of ideology on Muslim youth than Farah Pandith....I wish I’d had How We Win as a resource during my critical leadership efforts against Al Qaeda, the Taliban, and the Islamic State.”
— General John R. Allen, U.S. Marine Corps (Ret.), former Commander of the NATO International Security Assistance Force and U.S. Forces in Afghanistan (2011–2013) and Special Presidential Envoy to the Global Coalition to Counter the Islamic St

“Sharp, incisive wisdom from someone who had a front-row seat at one of modern history’s great inflection points… How We Win should be required reading for anyone interested in harnessing new ideas to tackle some of the world’s toughest international security challenges.”
— Jared Cohen, Founder and CEO of Jigsaw

“In this indispensable book, Pandith sets forth a detailed and comprehensive approach to countering violent extremism that serves as a call to arms for governments, businesses, and communities alike.”
— Matthew G. Olsen, former Director of the National Counterterrorism Center

“In How We Win, Farah Pandith offers fresh thinking, both profound and practical, on one of our most vexing challenges—combating violent extremism…Pandith gets to the root causes of the problem and, as important, offers a clear, feasible path forward to solve it.”
— Eric J. McNulty, Associate Director of the National Preparedness Leadership Initiative (a joint program of the Harvard T.H. Chan School of Public Health’s Division of Policy Translation and Leadership Development and the Harvard Kennedy Scho

“For more than a decade, Farah Pandith has been on the front lines of the battle against extremist ideologies across the world…Now that expertise is available in this remarkable and timely book. This is the new paradigm in the fight against global extremism.”
— Reza Aslan, author of God: A Human History and Zealot: The Life and Times of Jesus of Nazareth

“It is hard to think of anyone more knowledgeable than Farah Pandith when it comes to countering violent extremism….This book is full of wisdom about how to deal with one of our great challenges.”
— Joseph S. Nye Jr., University Distinguished Service Professor Emeritus at Harvard University and author of The Future of Power

“How We Win is a smart, original, and timely look at the ground reality of extremism in the Muslim world and, more important, how an unlikely alliance of entrepreneurs and technologists could provide the antidote.”
— Vali Nasr, Dean of Johns Hopkins School of Advanced International Studies and author of The Dispensable Nation: American Foreign Policy in Retreat

“How We Win is surely the best book about how the U.S. government and others need to think about how best to counter violent extremism and also how to act to curb the spread of extremist ideologies.”
— Peter Bergen, author of United States of Jihad: Who Are America’s Homegrown Terrorists, and How Do We Stop Them?

“Farah Pandith was a pioneer for Presidents George W. Bush and Barack Obama…she illuminates in this indispensable book how America and her friends and allies can defeat the extremist threat.”
— Nicholas Burns, Professor at the John F. Kennedy School of Government at Harvard University, former Under Secretary of State for Political Affairs, and former U.S. Ambassador to NATO and Greece

“There is no more important voice on how we should recognize and confront these morphing ideological threats; how we can enlist social, corporate, and economic power—including millennials and new technologies—to confront the underpinnings of terror globally; and ultimately how we win through the power of our ideas.”
— Juan Zarate, Former Deputy Assistant to the President and Deputy National Security Advisor for Combating Terrorism for President George W. Bush

“How We Win shows us exactly what we need to do, and can do, to turn the tide.”
— The Honorable Stephen J. Hadley, Assistant to the President for National Security Affairs and Board Chair at the U.S. Institute of Peace