To Explain the World: The Discovery of Modern Science (Paperback) 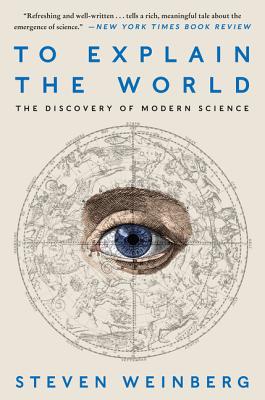 By Steven Weinberg
Email or call for price
Special Order

Weinberg is considered one of top physicists in the world and has won a Nobel for his work. He also writes elegantly on science for the NYRB. In this book he talks about the arc of scientific knowledge from the Greeks to us. Should the Greeks be credited for any prescient fragments written about "atoms." Not a chance, according to Weinberg, what we know now has been slowly accumulated over centuries and there are big epistemic breaks along the way. — From Jeff's Picks

A masterful commentary on the history of science from the Greeks to modern times, by Nobel Prize-winning physicist Steven Weinberg—a thought-provoking and important book by one of the most distinguished scientists and intellectuals of our time.

In this rich, irreverent, and compelling history, Nobel Prize-winning physicist Steven Weinberg takes us across centuries from ancient Miletus to medieval Baghdad and Oxford, from Plato’s Academy and the Museum of Alexandria to the cathedral school of Chartres and the Royal Society of London. He shows that the scientists of ancient and medieval times not only did not understand what we understand about the world—they did not understand what there is to understand, or how to understand it. Yet over the centuries, through the struggle to solve such mysteries as the curious backward movement of the planets and the rise and fall of the tides, the modern discipline of science eventually emerged. Along the way, Weinberg examines historic clashes and collaborations between science and the competing spheres of religion, technology, poetry, mathematics, and philosophy.

An illuminating exploration of the way we consider and analyze the world around us, To Explain the World is a sweeping, ambitious account of how difficult it was to discover the goals and methods of modern science, and the impact of this discovery on human knowledge and development.

Steven Weinberg is a theoretical physicist and the winner of the Nobel Prize in Physics, the National Medal of Science, the Lewis Thomas Prize for the Scientist as Poet, and numerous honorary degrees and other awards. He is a member of the National Academy of Science, the Royal Society of London, the American Philosophical Society, and other academies. A longtime contributor to the New York Review of Books, he is also the author of The First Three Minutes, Dreams of a Final Theory, Facing Up, and Lake Views, as well as leading treatises on theoretical physics. He holds the Josey Regental Chair in Science at the University of Texas at Austin.

“A thoughtful history.”
— The New Yorker

“The long march toward the modern scientific method is well-trodden territory for historians of science, but in tackling this familiar topic, Steven Weinberg offers a thoughtful, supplementary viewpoint.”
— The Washington Post

“Steven Weinberg, the world’s preeminent physicist, provides a masterful journey through humankind’s scientific coming of age. With its refreshing candor and lyrical prose, To Explain the World is a delightful celebration of our passionate drive for understanding.”
— Brian Greene

“This book transmutes the base metal of a mere history of science into pure gold -- into a magisterial celebration of a long and heroic struggle, still incomplete, to understand nature. Only a committed scientist of Steven Weinberg’s brilliance, experience and breadth of insight could have accomplished this.”
— Ian McEwan

“Refreshing and well-written. . . . To Explain the World tells a rich, meaningful tale about the emergence of science.”
— The New York Times Book Review

“Fascinating. . . . A sweeping narrative of the progression of ideas. . . . Weinberg masterfully explains how the emergence of the modern scientific method, the mechanism by which we interrogate the world and devise well-supported explanations we can be confident in, is itself a discovery.”
— Lewis Dartnell, The Telegraph

“Weinberg exemplifies a growing tendency in popular science writing to offer the matter of science and not just a superficial reading. It gives the book a bracing intellectuality. . . . This is a great book, a necessary book for our time.”
— The Independent

“A refreshing contrast to other tomes on the topic. . . . With To Explain the World, Weinberg reminds us to be humble not only about what we know, but how we know it. It’s a nuance, but an important one.”
— The Guardian

“I am amazed by what Steven Weinberg has done in this book. It is a unique and highly civilizing guide, obviously the result of years of wide-ranging scholarship, even with strategic humor.”
— Gerald Holton

“Weinberg is a fine writer and communicator about ideas beyond his own field. . . . He has clearly carried out extensive scholarly investigation for the book, and it works as history. But what makes it stand out is his perspective as a top scientist working today.”
— Financial Times

“Weinberg has combined his credentials with his knowledge of the history of science to examine a fascinating issue: how attempts to explain the world have changed over time. . . . He writes simply and clearly, and includes many telling insights.”
— BBC Focus

“Weinberg writes with clarity and wit. . . . His reasoning can be fascinating -- and eye-opening. . . . Weinberg is one of our greatest defeners of scientific thought, and his wit is a welcome salve in this authoritative history.”
— The Austin American-Statesman

“An ingenious account. . . . The author has a keen understanding of the precise details of his subject. . . . Readers will come away with a stimulating view of how humans learn from nature.”
— Kirkus

“Weinberg advances keen insights. . . into the intellectual structure of science. . . . A compelling reminder of how science works -- and why it matters.”
— Booklist (starred review)

“With his usual scholarly aplomb, Weinberg leads readers on a tour of early scientific theory, from the ancient Greeks to the Scientific Revolution of the 17th century. . . . Accessible and smoothly written, Weinberg’s book offers new insights on what has become familiar territory for pop-science readers.
— Publishers Weekly

“Entertaining. . . . The book should make any history of science buff’s reading list. . . . Weinberg gets it right.”
— Forbes

“The book is a magnificent contribution to the history and philosophy of science. It tells an exciting story. Why on earth did good science take so long to arrive?. . . . Weinberg writes with great verve and clarity.”
— The Times Literary Supplement