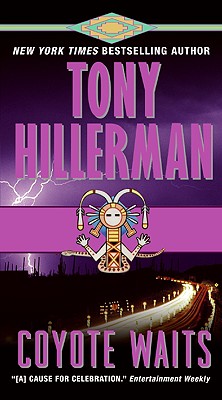 This is book number 10 in the A Leaphorn and Chee Novel series.

The tenth novel in Tony Hillerman's acclaimed Leaphorn and Chee series — “Bolt the door, disconnect the phone, and declare yourself off limits....Coyote Waits is a real confounder, not at all what you expected.” (Denver Post)

The car fire didn't kill Navajo Tribal Policeman Delbert Nez—a bullet did. And the old man in possession of the murder weapon is a whiskey-soaked shaman named Ashie Pinto. Officer Jim Chee is devastated by the slaying of his good friend Del, and confounded by the prime suspect's refusal to utter a single word of confession or denial.

Lieutenant Joe Leaphorn believes there is much more to this outrage than what appears on the surface, as he and Jim Chee set out to unravel a complex weave of greed and death that involves a historical find and a lost fortune. But the hungry and mythical trickster Coyote is waiting, as always, in the shadows to add a strange and deadly new twist.