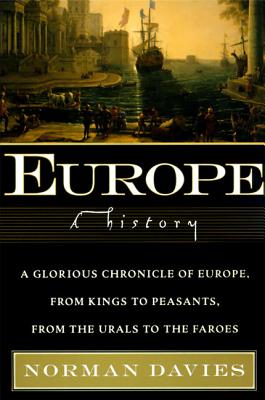 By Norman Davies
$25.99
This item is out of stock with our warehouse. Some recently published books may be in stock @ Room. Email to check.

Here is a masterpiece of historical narrative that stretches from the Ice Age to the Atomic Age, as it tells the story of Europe, East and West. Norman Davies captures it all--the rise and fall of Rome, the sweeping invasions of Alaric and Atilla, the Norman Conquests, the Papal struggles for power, the Renaissance and the Reformation, the French Revolution and the Napoleonic Wars, Europe's rise to become the powerhouse of the world, and its eclipse in our own century, following two devastating World Wars. This is the first major history of Europe to give equal weight to both East and West, and it shines light on fascinating minority communities, from heretics and lepers to Gypsies, Jews, and Muslims. It also takes an innovative approach, combining traditional narrative with unique features that help bring history alive: 299 time capsules scattered through the narrative capture telling aspects of an era. 12 -snapshots offer a panoramic look at all of Europe at a particular moment in history. Full coverage of Eastern Europe—100 maps and diagrams, 72 black-and-white plates. All told, Davies's Europe represents one of the most important and illuminating histories to be published in recent years.

“The book’s true originality lies in its all-inclusive scope and erudition, and literary panache with which the story of Europe is told.” — Time (Atlantic edition)

“Davies’s copious unfolding of the entire course of European history exhausts the subject but certainly not the reader, for he maintains a remarkable fluidity throughout.” — Booklist (starred review)

“A magisterial work, sweeping in its analysis, illuminating in its insights, and erudite in its scholarship.” — Zbigniew Brzezinski